Why did Henry McMaster drop the charges against Barrett and Barrett Thomas Boulware?

by Archive
in News, Politics, States

Many in the American southeast know of South Carolina attorney Alex Murdaugh, a man with connections to at least five deaths that have drawn national attention. Now, revelations of the death of a man named Franklin C. Branch in 1983 are circulating around The Palmetto State, thrusting Republican Governor Henry McMaster into the spotlight due to his involvement with a Murdaugh-affiliated powerhouse that has largely remained away from the headlines; the Boulware family.

As South Carolina Senator Katrina Shealy put it, “it all started out with a hit and run, that wasn’t really a hit and run, then a boat crash that was a boating under the influence that ended up in murder and serious injury, then the Housekeeper is thrown down the steps because she knows [sic] too much and later dies and her families hush money is absconded[…]by attorneys.” For those who are unaware, South Carolina finds itself in the midst of a remarkable and mysterious string of suspicious deaths and confusion relating to attorney Alex Murdaugh and his generation-spanning family dynasty in the South:

But in recent years, the family has been closely connected to bloody tragedy. There was a fatal boating crash in 2019, the killings of two family members in June, the shooting of a family member last week;”> and allegations of misappropriated funds and drug abuse.

Here’s a timeline of what we know about the Murdaugh family’s illustrious history, the killings of Margaret Murdaugh and her son Paul, the shooting of Alex Murdaugh last week and the course of the investigation throughout.

In a comprehensive article covering Murdaugh’s business ties to an alleged drug smuggler, Will Folks of Fits News reported on a connection to the Murdaugh family that has “stayed out of the newspapers for years”: the Boulware family. The report raises questions concerning the Boulwares fishing operation off the coast of South Carolina, which was rumored to be a drug trafficking operation.

Barrett Thomas Boulware, 27 at the time, was alleged to have been running drugs with his father, also named Barrett Boulware. “It has long been alleged that he [Barrett Thomas Boulware] used his shrimp boats for hauling contraband,” a Lowcountry lawyer told Folks, who added that the same rumors were shared about his father, who was interestingly also a “peer of former S.C. fourteenth circuit solicitor Randolph “Buster” Murdaugh Jr.” Folks noted, “in fact, the elder Boulware’s father – a lawyer named Thomas McCullough Boulware – tried cases with Murdaugh in the late 1940’s.”

In January 1980, the US Coast Guard discovered two boats, the Miss Kathy and the Waterworld, during a routine patrol near an area reportedly serving as a potential location to be used by smugglers – the St. Helena Sound. That night, eleven men were discovered aboard the Waterworld, a ship owned by Boulware. The men were reportedly from the Miami area, and had alleged that they were rescued by the shrimp boat after theirs, the Island City, had sunken into the sea:

A coast guard warrant officer, George Matheson, told the wire service the cause of the sinking was ‘unclear’ and ownership of the vessel was ‘not immediately established.’

According to the report, the operator of the Miss Kathy, Edward E. Legree, was temporarily held by the Coast Guard, and DEA agents questioned the men found on the Waterworld, but no arrests were made. Legree was ultimately arrested six years later as part of a multi-agency sting operation known as Operation Cancer, led by the DEA and local law enforcement that shut down of a “network that moved more than 40,000 pounds of marijuana into the country,” that ran from December 1982 to May 1983, according to Folks.

However, around this time in February 1983, a Coast Guard cutter encountered another ship owned by Boulware called the Jeannine Ann, supposedly a shrimper. Upon law enforcement boarding the vessel, 854 bales of marijuana were found on-board at a time when the drug was still highly illegal throughout the United States. When the ship made its way to Beaufort, South Carolina, law enforcement arrested the individuals involved.

Folks noted that despite the political ramifications at the time, the operation “never ensnared” Barrett and Barrett Thomas Boulware. This was due to the 1983 suspicious death of the ship’s captain, Franklin C. Branch, one of 17 involved who was set to serve as a government witness in the case against the Boulwares. According to the report, Branch “walked into the path of an oncoming vehicle” shortly before he was set to testify against the two. As a result of Branch’s mysterious death and unattainable testimony, the US Attorney’s office led by McMaster dropped the charges against both Boulwares. Emphasis added by National File. 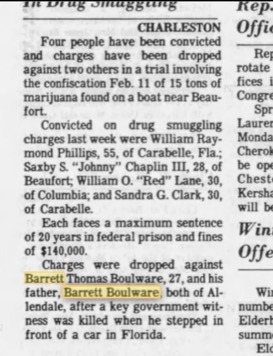 Boulware passed away from cancer in 2018 and gave his power of attorney to Murdaugh. They still co-own multiple properties on or around “the hotbed of the drug trade,” and their families ties are immensely extensive. In the article, Folks raises the question “so what is Alex Murdaugh using these properties for?” adding that “whatever Alex Murdaugh is ‘into,’ he is into it deep.”

Since the suspicious death of Franklin C. Branch in the 1980’s, and the coincidental legal sparing of Murdaughs close business partners shortly thereafter, the Murdaughs have been very generous towards McMaster’s political aspirations. According to reports, McMaster received $31,500 from the years 2008-2018 from the Murdaughs in political contributions. Furthermore, less than two years after McMaster won his gubernatorial election, he even went so far as to bestow the son of the aforementioned Randolph “Buster” Murdaugh Jr., Randolph Murdaugh III, the Order of the Palmetto on September 20, 2018; the highest civilian honor that can be awarded by the Governor of South Carolina.

As was noted by Folks at the end of his groundbreaking piece, “given the Murdaugh-Boulware ties uncovered in this story, it is not hard to see why so many people are so concerned about the direction this story could take…”