School Board Member Who Voted To Mask Children CAUGHT Unmasked At Concert With 10,000 People The Next Day

School Board Member Who Voted To Mask Children CAUGHT Unmasked At Concert With 10,000 People The Next Day

A Minnesota School Board member was caught unmasked at a concert with thousands of people just one day after voting to mask children.

A Minnesota local school board member who voted to force children to wear masks was caught unmasked at a concert with nearly 10,000 people the very next day.

The Red Wing, Minnesota School Board had just voted for a mask mandate for children in their schools during a special school board meeting on August 23. One very liberal member of the board who voted in favor of child mask enforcement, Jennifer Kizer Tift, was caught unmasked at a concert attended by nearly 10,000 people the very next day in Colorado on August 24.

Wow! Listen to Tift discuss why she’s “sad” and “angry” that the school board had previously decided that “personal freedom was more important than our community responsibility and the need to take care of one another” as she advocates for forcing children to wear masks.

Tift allegedly attended a show that included a performance by Nathaniel Rateliff & the Night Sweats Soar at Red Rocks Amphitheater in Colorado. In a report by Westword, it was revealed that the “9,500 person venue was packed.” In the photo above, viewers may notice the rock structure where the amphitheater is located. (READ MORE: STUDY: MSM Admits Common Blue Masks ‘Do NOT Stop COVID-19 Spread’)

Coronavirus superspreader Tift seemingly believes in her personal freedoms over the health and safety of children, despite what she previously claimed in the Special School board meeting the day before she went to a concert with thousands of people without wearing a mask.

On Tift’s Facebook page, she frequently posts liberal content; COVID-19 propaganda and LGBTQ imagery. She advocates for the mass vaccination of children as well, and shared an image posted by the Red Wing Public Schools Facebook page that stated “Get your kids vaccinated now so they will be fully protected before school starts.” 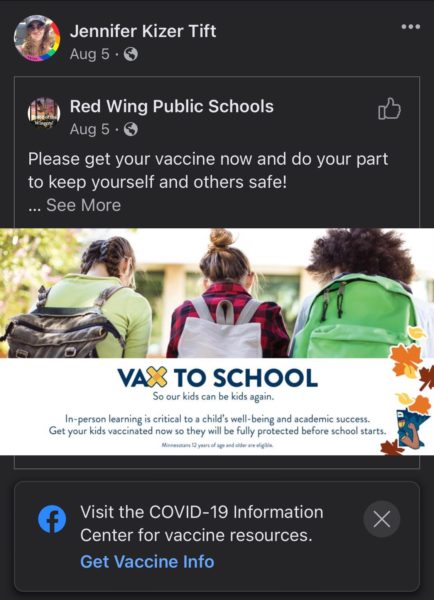 National File reached out to the Red Wing School Board for comment but has yet to receive a response.