by Cullen McCue
in 2022, Education

San Francisco voters have ousted three progressive members of the city’s school board in a historic recall election. The recall election — which was the city’s first since 1983 — was an overwhelming success for those in favor of removal, according to the San Francisco Department of Elections. Voters cited concern over progressive ideology taking center stage while the city’s public schools remained shuttered for over a year.

It’s over. Parents and students won, against the odds. Pass this on to your school boards members who’ve been silent and/or refused to stand up for your kids. pic.twitter.com/vJmAT3Eujd

San Francisco school board members Faauuga Moliga, Gabriella Lopez and Alison Collins are all out after voters overwhelmingly backed removal. Not one embattled board member received more than 28% of the vote, while 79% of voters backed removing Alison Collins. Close to 126,000 voters turned out for the landslide recall election, which was the city’s first since 1983, when then-Mayor Dianne Feinstein was unsuccessfully recalled.

San Francisco Mayor London Breed will now be tasked with appointing replacements for the ousted board members. The appointees will serve until November, when voters can choose a new school board. “The voters of this city have delivered a clear message that the school board must focus on the essentials of delivering a well-run school system above all else,” Breed said in a statement.

Those who voted to remove expressed concern over progressive ideology being taught in schools, such as Critical Race Theory-themed curriculum. A city effort to rename 44 schools drew widespread criticism from parents. School board members said they focused on schools that honored public figures linked to racism, sexism and other injustices. On the list were names like George Washington, Abraham Lincoln and Dianne Feinstein.

The renaming effort was criticized for historical inaccuracies and poor research, as well as its timing. The board moved forward with the measure in January 2021, when all city schools were shut down and students were left to contend with online learning. The plan was ultimately scrapped. Most of the city’s 115 schools were closed for over a year, from March 2020 to August 2021, even as nearby districts reopened classrooms and private schools across the city held in-person classes.

Board members were later slapped with multiple lawsuits, including one from the City of San Francisco, which sued the school district and the board in an effort to pressure both to reopen classrooms more quickly. “Sadly, our school board’s priorities have often been severely misplaced,” Mayor Breed said in her endorsement of the recall effort. “San Francisco’s public school parents aren’t just voicing normal, commonplace frustrations.”

Voters also expressed concern over a brutal rise in anti-Asian attacks that have plagued the city since the pandemic began. Now-ousted board member Alison Collins came under fire after tweets from 2016 surfaced in which Collins said she was “looking to combat anti-black racism in the Asian community” at her daughters’ “mostly Asian” school. Over 60 anti-Asian hate crimes and assaults were reported in San Francisco last year while such crimes spiked 339% nationwide. 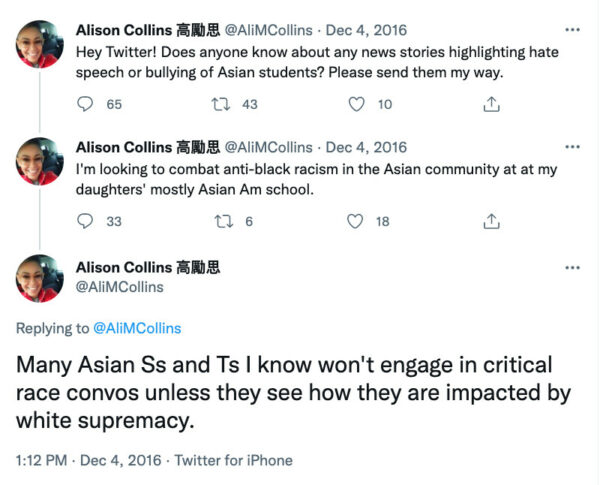