by National File News
in Coronavirus, News, Politics, The Hill

The comment was made in response to a video posted by the Daily Caller in which Pelosi denied that her version of the coronavirus stimulus bill included political policy unrelated to COVID-19.

Cramer later deleted the comment, blaming it on autocorrect. 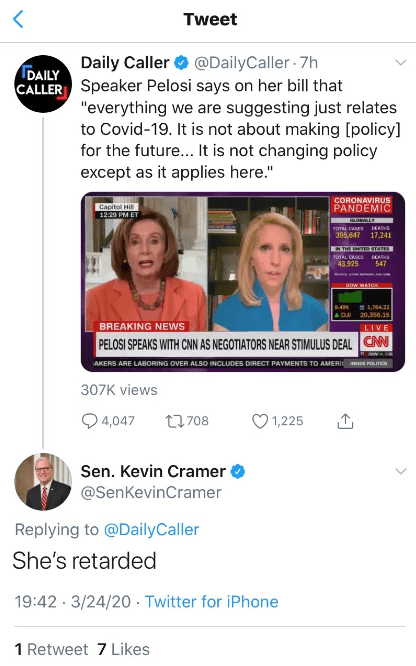 The Senate agreed on a $2 trillion stimulus package on Wednesday, several days after congressional Democrats first began delaying the bill.

Cruz urged Democrats to not treat the stimulus like a “partisan Christmas,” reminding viewers that Republicans have not done the same. “You don’t talk about what I’d like to do, I’d like to abolish the IRS… but Mr. President I’m not standing here with an amendment saying as part of this emergency relief let’s abolish the IRS.”

“The Democrats are pushing wind and solar tax credits,” Cruz continued. “Mr. President, what in the hell does a windmill have to do with this crisis, other than there’s some Democratic lobbyists getting fat and rich, and they’re willing to extort a crisis to advance their political agenda.”

Congressional Democrats have come under heavy bipartisan criticism for their handling of the stimulus bill.