by National File News
in Coronavirus

One friend replied saying that Johnson’s positive result shows that the “dua,” the Islamic term for “prayer,” is being answered.

READ MORE: NHS Told to Hide IDs After Being Mugged for Free Food During Coronavirus Pandemic

In her biography, Zaman identifies herself as the Chair of Warwick Labour, and an “advocate” of Warwick Decolonise, a group dedicated to “decolonising the curriculum” at the University of Warwick. 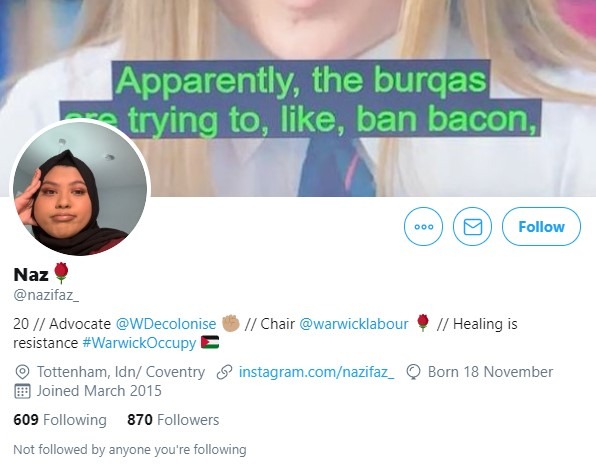 Zaman’s tweet was subject to criticism and response immediately, with one noting that if Johnson had said the same thing about her, she would be complaining about “unfairness and inequality,” and others describing her actions as “disgusting”:

I don't think it reflects well to be appearing to be pleased that anyone has got it.

Not surprised by this labour voters all over disgusting

UGLINESS JUST OOZES OUT OF SOME PEOPLE.

These are not British values. Shameful.

After receiving the backlash online, Zaman made her account private, but then opened it again, and stuck by her words.

“Notifications are off people I don’t follow so come for me all u want loooool, again, I said what I said,” Zaman tweeted.

The National File has reached out to both the national Labour Party and the University of Warwick Labour Society for comment, and will update the story as soon as there is any response.

The University of Warwick’s official Twitter account replied to Zaman’s original tweet. “We send our best wishes and compassion to each and every person who has sadly become infected, and for their families, and do not condone any remark to the contrary,” the University tweeted, but added that they “deplore the abuse now being directed at a member of our university community [Zaman].”

Many were displeased with the reaction of the University, including members of the Muslim community:

No offence but look who started with the original comment. If these are the type of people you have on your community then I will not be attending any more meetings or events at Warwick Uni. You have clearly sided with the wrong person here. And yes, im Muslim, and disgusted.

And what she said is not abuse? This person must go through a disciplinary procedure, she is represents the university and one of its societies.

Why don’t you deplore the appalling comment about Boris made by your student? https://t.co/2MX6ITIVro

In an email to National File, the office of Matt Western, the MP for Warwick and Leamington, did not explicitly condemn the comments, but reiterated that the university society is unaffiliated with himself and the Warwick and Leamington Labour Party. “Matt has sent his wishes to the Prime Minister hoping for a speedy recovery,” the email continued.

We will continue to update this story.