by Archive
in Borders, Civil Unrest

After police vacated buildings, Antifa established what is being called the Seattle Capitol Hill Autonomous Zone, and began self-governing within the six-block space, only to reportedly have homeless people steal their food supply and their leader step down and threaten to kill themself after admitting to being a “serial abuser” on Twitter.

Yesterday the establishment of the autonomous zone was reported widely on social media, with Andy Ngo writing that the mayor “is allowing a dangerous situation to fester,” and that “Antifa set up barricades to create a border. Calling for volunteers to provide armed guard.”

Photos show the geographic region blocked off by Antifa, as well as road blocks complete with cardboard signs that read “You are entering Free Capitol Hill.”

Seattle @MayorJenny is allowing a dangerous situation to fester. #Antifa militants have taken over & created an “autonomous zone” in city w/their own rules. Police precinct abandoned. Antifa set up barricades to create a border. Calling for volunteers to provide armed guard. pic.twitter.com/ksQI4NI5kP

One user uploaded video of the autonomous zone, showing individuals walking around in heavy clothing as speeches are heard coming over amplifiers.

“Walking through the Capitol Hill Autonomous Zone,” wrote the person who uploaded the video.

Another video shows a man posting a new sign that reads “Welcome to the Capitol Hill Autonomous Zone” on a phone pole somewhere within the six block perimeter, while a photo shows the completed sign, and another sign made from what appears to be canvas or a trash bag that reads “Property of the Seattle People.”

Saleem Juma, a conservative content creator and videographer, uploaded several videos of his walk through of the area, showing more barricades, graffiti, a memorial to Black Lives Matter, and a police department that has been amended to be the “People’s Department.”

However, trouble soon emerged when, according to screen shots of tweets by the purported leader of the autonomous zone who now has their Twitter account locked, food was stolen and accusations of abuse began to circulate.

The leader purportedly wrote, “The homeless people we invited took away all the food at the Capitol Hill Autonomous Zone,” and added that “We need more food to keep the area operational. Please if possible bring vegan meat substitutes, fruits, oats, soy products, etc. – anything to help us eat.”

When one user raised the concern that the tweet may be fake and from a provocateur seeking to undermine the autonomous zone, another user claimed that “it’s real” and that the user “claimed to be a leader in the autonomous zone but it was later revealed she has a history of abusing others and now her account is on private.”

It’s real, she claimed to be a leader in the autonomous zone but it was later revealed she has a history of abusing others and now her account is on private. pic.twitter.com/tnRvrRqK0j

Screen shots purportedly from the anarchomastia Twitter account run by the person describing themself as the leader shows what appears to be a confession of abusing romantic partners.

“I’m a serial abuser and I really don’t believe anyone can ‘get better’ from a situation like that,” wrote the purported leader. “I’m going to peacefully end my life so I won’t hurt anyone else.” 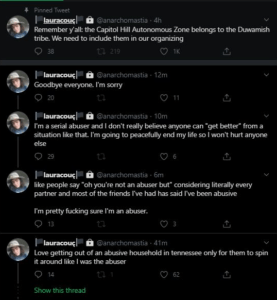 At press time the user’s tweets are still protected and cannot be seen unless the account has already been followed, but the profile photo has been updated.

If you or a loved one are experiencing suicidal thoughts, please call the National Suicide Prevention Lifeline at 1-800-273-8255.