by Frankie Stockes
in 2022, Elections, News, Politics, The Hill

US Representative-elect Anna Paulina Luna has come out against Kevin McCarthy’s campaign for Speaker of the House in a public statement to the constituents of Florida’s 13th Congressional District. In it, she issued a 5-point list of priorities that she says any GOP Speaker candidate should have, including a scrapping of Nancy Pelosi’s House rules, the return of the motion to vacate, and a commitment not to use dark money to railroad conservative candidates in GOP primaries, as McCarthy did in 2022.

Luna, a conservative Rep-elect from Florida’s Pinellas County-based 13th District, issued a public statement to her constituents this month, laying out her requirements for a Speaker candidate. The list echoed the demands of Freedom Caucus Reps, like Bob Good and Matt Gaetz, who’ve also publicly come out against McCarthy’s speakership campaign.

Ahead of the January 3rd vote for Speaker, McCarthy has failed to garner enough support to secure the 218 votes he needs, after previously falling short in an internal GOP vote. According to his conservative opponents and estimates based on the public statements of Representatives, McCarthy could need as many as 25 Democrat votes to become Speaker of the House.

Luna called for a return of the crucial motion to vacate the chair, which was stripped away in Nancy Pelosi’s House rules packages. Without it, members of Congress are powerless to hold the Speaker accountable, and Kevin McCarthy has refused to commit to bringing the motion back.

The motion to vacate, “stood the test of time for 200 years, starting with Thomas Jefferson,” Luna’s statement reads, before explaining that without it, Pelosi has been able to “exercise total control,” as members of Congress are powerless to stop her.

Luna also called for the “fair treatment” of all members of Congress, and an end to the Pelosi-era practice of icing the American people and their elected Representatives out of the legislative process, by concentrating power among party leadership, and a “clear policy agenda” to reign in government spending.

She also called out Kevin McCarthy’s meddling in GOP primaries, like that of Laura Loomer in Luna’s home state of Florida, a race in which Kevin McCarthy and his political machine spent dark money from the corrupt FTX crypto exchange to sabotage the conservative challenger to an establishment incumbent.

A suitable Speaker candidate must make “a commitment to staying neutral in Republican primaries, including financially, through 3rd parties and allied groups,” Luna’s statement reads, before also calling for conservative representation on the all-important Rules Committee.

“I will only vote for a Speaker candidate who embraces these changes,” the statement goes on, effectively ruling McCarthy out altogether. 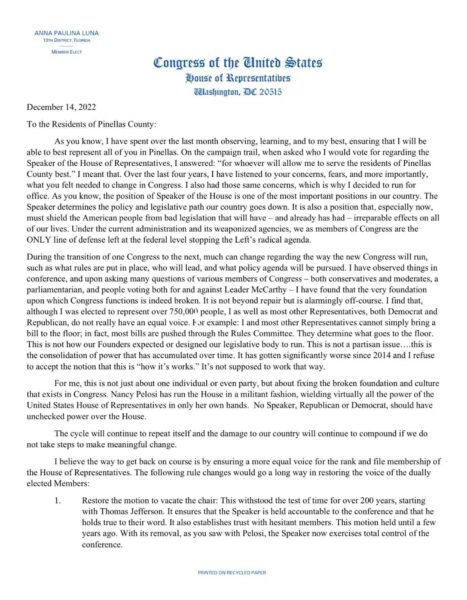 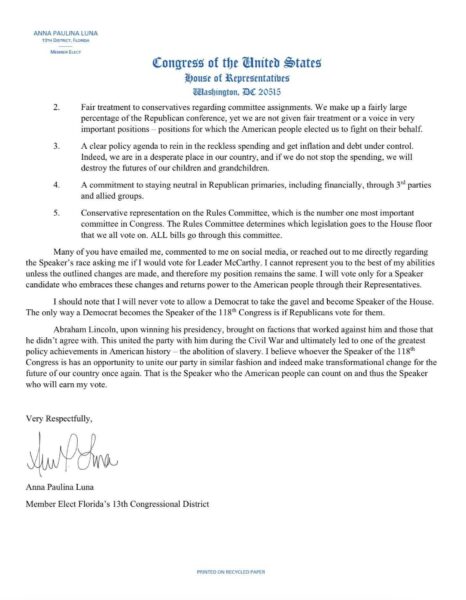