This expert report by Green Beret Veteran and Constitutional Attorney Ivan Raiklin is Part 6 of a 13 Part special investigative series that exposes Kevin McCarthy's massive vulnerabilities as a potential Speaker of the House and even as a regular member of Congress.

by Frankie Stockes
in 2022, Deep State, Elections, News, Politics, The Hill, The Swamp

The Concern. Failure to live within one’s means, satisfy debts, and meet financial obligations may indicate poor self-control, lack of judgment, or unwillingness to abide by rules and regulations, all of which can raise questions about an individual’s reliability, trustworthiness, and ability to protect classified or sensitive information. Financial distress can also be caused or exacerbated by, and thus can be a possible indicator of, other issues of personnel security concern such as excessive gambling, mental health conditions, substance misuse, or alcohol abuse or dependence. An individual who is financially overextended is at greater risk of having to engage in illegal or otherwise questionable acts to generate funds. Affluence that cannot be explained by known sources of income is also a security concern insofar as it may result from criminal activity, including espionage.

Conditions that could raise a security concern and may be disqualifying include:

(a) inability to satisfy debts;

While there is limited evidence of personal inability to satisfy debts, there is a growing concern that his decisions on the house floor create an environment that forces the nation into an inability to satisfy its own debts and thus giving other nations such as China leverage over the United States and its citizens. It places the Country in a compromising position. Additionally, Minority Leader Kevin McCarthy oversaw 9 of his republican conference to vote for increasing the U.S. Debt by yet another $1.7 Trillion dollars. Reps. John Katko (R-NY), Chris Jacobs (R-NY), Brian Fitzpatrick (R-PA), Fred Upton (R-MI), Rodney Davis (R-IL), Jaime Herrera Beutler (R-WA), Steve Womack (R-AR), Adam Kinzinger (R-IL), and Liz Cheney (R-WY);

(b) unwillingness to satisfy debts regardless of the ability to do so;

(c) a history of not meeting financial obligations;

Votes in the House show that he is unwilling to be a responsible steward of taxpayer funds. We continue to investigate Kevin McCarthy’s personal finances to determine if there is a heightened risk under this adjudicative guideline.

Deceptive and illegal financial practices and other intentional financial breaches of trust by Kevin McCarthy include his voting to fund Ukraine for a war effort, while some of that money was diverted and laundered into FTX  and comingled with stolen depositor money to fund Kevin McCarthy affiliated Political Action Committees. 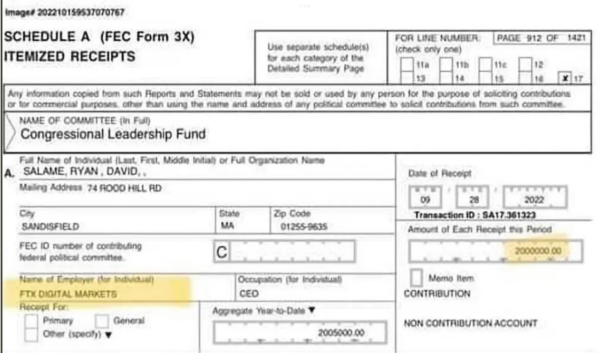 (e) consistent spending beyond one’s means or frivolous or irresponsible spending, which may be indicated by excessive indebtedness, significant negative cash flow, a history of late payments or of non-payment, or other negative financial indicators;

This transgression would apply to his role as a member of Congress who lead a party that allowed for the above to take place on behalf of the nation due to weakness in resolve and likely compromise himself as outlined in previous adjudicative guidelines.

No evidence was found, however, one incoming House Member, George Santos may be subject to this transgression and is actively supporting McCarthy to be the next Speaker of the House. Further investigation may lead to nefarious or improper funds between the two. Should there be an update, we will amend this adjudicative guideline.

(g) unexplained affluence, as shown by a lifestyle or standard of living, increase in net worth, or money transfers that are inconsistent with known legal sources of income;

(i) concealing gambling losses, family conflict, or other problems caused by gambling.

A quote from the Congressman-Elect who supports Kevin McCarthy that allegedly was elected based on a multitude of alleged fabrications and unaccounted-for wealth, George Santos is currently under investigation.

VERDICT: Kevin McCarthy’s counterintelligence risk of Financial Considerations has thus far resulted in limited direct evidence to support an unfavorable adjudication. However, we continue to monitor if any money potentially received by him, his campaign and associated Political Action Committees was from Ukraine corrupted FTX depositors/executives. Additionally, we will continue to monitor if these money flows could have created a significant conflict of interest or complicity in potential fraud if it was known this money was corrupted and may have placed him in a conflict of interest. Absent further evidence to support and substantiate personal use of these monies, we currently determine that there is a low-moderate level risk, but requires continued monitoring. Should anyone come forward with verifiable evidence to show to the contrary, please provide them to [email protected]

This report was originally compiled by Green Beret Veteran and Constitutional Attorney Ivan Raiklin and then censored by Substack.

Stay tuned to National File for more of Ivan Raiklin’s expert counter-intelligence investigation into Rep. Kevin McCarthy, as Patriots within Congress take on the uni-party swamp to bring McCarthy’s campaign for Speaker to a screeching halt.