This expert report by Green Beret Veteran and Constitutional Attorney Ivan Raiklin is Part 5 of a 13 Part special investigative series that exposes Kevin McCarthy's massive vulnerabilities as a potential Speaker of the House and even as a regular member of Congress.

by Frankie Stockes
in 2022, Deep State, Elections, News, Politics, The Hill, The Swamp

Conduct involving questionable judgment, lack of candor, dishonesty, or unwillingness to comply with rules and regulations can raise questions about an individual’s reliability, trustworthiness, and ability to protect classified or sensitive information. Of special interest is any failure to cooperate or provide truthful and candid answers during national security investigative or adjudicative processes. The following will normally result in an unfavorable national security eligibility determination, security clearance action, or cancellation of further processing for national security eligibility.

(a) refusal, or failure without reasonable cause, to undergo or cooperate with security processing, and

(b) refusal to provide full, frank, and truthful answers to lawful questions of investigators or other official representatives in connection with a personnel security or trustworthiness determination.

-Kevin McCarthy has failed since 2015 to address the original concern by Congressman Walter Jones that was raised regarding why McCarthy dropped out of the race for the Speaker of the House. Essentially trying to ignore and divert attention from an alleged affair with fellow Congresswoman Renee Ellmers.

Conditions that could raise a security concern and may be disqualifying include:

Since the US Constitution in Article I, Section 7 stipulates that “All Bills for raising Revenue shall originate in the House of Representatives” and because since the Speaker of the House is the person charged with the most fiduciary responsibilities in the nation, determining the $6.2Trillion budget and growing, it is of paramount concern to ensure that this office holder does not omit, conceal, or falsify relevant facts of personal history and to ensure that all questions related to trustworthiness are addressed. Since questions of trustworthiness have not been addressed for the last 7 years, an untrustworthy officeholder of the Speaker’s Gavel becomes catastrophic for the national security and very existence of the nation.

(b) deliberately providing false or misleading information; or concealing or omitting information, concerning relevant facts to an employer, investigator, security official, involved in making a recommendation relevant to a national security eligibility determination, or other official government representative;

On numerous occasions, Kevin McCarthy has deliberately provided false and misleading information through the concealment of relevant facts, as it relates to his bid for the Speakership in 2015 and the transgressions that forced him from that position, as well as concealing and omitting relevant information as it relates to his conversations with Liz Cheney, an individual actively pursuing the destruction of our Constitutional order along with her mentor Mike Pence.

(c) credible adverse information in several adjudicative issue areas that is not sufficient for an adverse determination under any other single guideline, but which, when considered as a whole, supports a whole-person assessment of questionable judgment, untrustworthiness, unreliability, lack of candor, unwillingness to comply with rules and regulations, or other characteristics indicating that the individual may not properly safeguard classified or sensitive information;

In parts 1, 2, 3, and 4 of this Counterintelligence Investigation of Kevin McCarthy, we have outlined the numerous violations that put into question his ability to avoid blackmail based on transgressions in the following categories:

1 Allegiance to the United States

Additionally, the revelations of his lying and untrustworthiness amongst his respected colleagues in the House of Representatives bring more evidence to make an unfavorable determination as it applies to Guideline 5, Personal Conduct.

(d) credible adverse information that is not explicitly covered under any other guideline and may not be sufficient by itself for an adverse determination, but which, when combined with all available information, supports a whole-person assessment of questionable judgment, trustworthiness, unreliability, lack of candor, unwillingness to comply with rules and regulations, or other characteristics indicating that the individual may not properly safeguard classified or sensitive information. This includes, but is not limited to, consideration of:

(1) untrustworthy or unreliable behavior to include breach of confidentiality, release of proprietary information, unauthorized release of sensitive corporate or government protected information;

(2) any disruptive, violent, or other inappropriate behavior;

This was addressed in parts 1-4 of this counterintelligence report and will be provided in subsequent parts.

(3) a pattern of dishonesty or rule violations; and

Read More: Rep. Good: We Will Defeat Kevin McCarthy on the House Floor

(e) personal conduct, or concealment of information about one’s conduct, that creates a vulnerability to exploitation, manipulation, or duress by a foreign intelligence entity or other individual or group. Such conduct includes:

(1) engaging in activities which, if known, could affect the person’s personal, professional, or community standing; 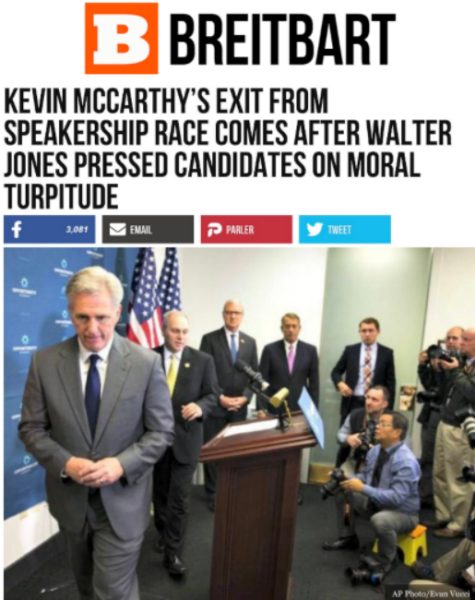 (f) violation of a written or recorded commitment made by the individual; and

Kevin McCarthy’s association with seditious conspirators: George W. Bush, Dick Cheney, Paul Ryan, Mike Pence, Nancy Pelosi, Chuck Schumer, Mitch McConnell, and General Mark Milley to effectuate a Coup d’etat on January 6, 2021, by usurping the Constitutional Authority that a sitting President of the United States of America had and instead unconstitutionally granting it to the Vice President to order the US military around without invoking the 25th Amendment, Section 4, made him a complicit actor in a criminal treasonous act.

Additionally, when Kevin McCarthy attended a dinner at the White House with the Chinese Communist Party’s Captured Illegitimate Ambassador to the U.S. Joseph R. Biden along with his son Hunter, whom he and his criminal syndicate family has been charged with 459 crimes, see Marco Polo USA report. As Kevin McCarthy rebuffs President Trump for having dinner with a Hispanic young man, black rapper, gay foreigner, and a woman exercising their First Amendment in his own home, McCarthy cavorts with an individual that has had inappropriate showers with his daughter, and a known agent of the Chinese Communist Party based on his 10% financial dealings with Chinese intelligence.

These are all crimes of the highest order and thus Kevin McCarthy’s association with these individuals clearly violates this adjudicative guideline. Additionally, as outlined in Parts 1-4 of this report, you can clearly see the alleged relationship that McCarthy has with executives of FTX, particularly Ryan Salame. Something that our investigative team is further looking into for financial crimes and campaign finance crimes.

VERDICT: Kevin McCarthy’s counterintelligence risk based on his Personal Conduct is a walking nuclear time bomb and will result in a catastrophic national security impact putting the nation at peril should he become the Speaker of the House.

This report was originally compiled by Green Beret Veteran and Constitutional Attorney Ivan Raiklin and then censored by Substack.

Stay tuned to National File for more of Ivan Raiklin’s expert counter-intelligence investigation into Rep. Kevin McCarthy, as Patriots within Congress take on the uni-party swamp to bring McCarthy’s campaign for Speaker to a screeching halt.