Biden’s attempted insult fell flat, and was quickly co-opted by Trump and his supporters

by Frankie Stockes
in Politics, The Swamp

45th President Donald J. Trump thanked Joe Biden for crowning him the “Great MAGA King” in a post he made to his Truth Social platform after Biden’s attempt to use the moniker as an insult fell flat.

Joe Biden’s “Great MAGA King” remark came as he spoke to an International Brotherhood of Electrical Workers (IBEW) conference in Chicago this week. Like many labor unions, those at the top of the IBEW have continued supporting Biden and other Democrats, while the skilled tradesmen and others within the union’s ranks have widely rejected the left. Blue collar workers, like the members of the IBEW, helped form the core bloc of America First populist voters that sent President Trump to the White House.

While speaking to the IBEW, Biden lamented Florida GOP Senator Rick Scott’s 11-point tax plan that Scott says will help counteract the Biden Administration’s record-setting inflation numbers and budgetary shortfalls. In addition to slashing government spending, the plan will, for the first time in history, force all Americans to have “skin in the game” by paying taxes. Scott, and those in favor of his plan, reportedly hope to bring some relief to the massive tax burden felt by working- and middle-class Americans, who have been increasingly tasked with funding government entitlement programs for people who pay nothing into the system.

Biden has gone on the attack regarding Scott’s plan, but has yet to accept an offer from Senator Scott to debate him on the matter, leading Scott to question his mental and physical capacity.

At the IBEW’s Chicago conference, Biden parroted left-wing economic talking points blaming the Trump Administration for his own economic crisis and even crediting himself with lowering the nation deficit. In reality, the deficit fell when multi-billion-dollar COVID relief packages, which were demanded by Congressional Democrats in 2020, expired and Biden expanded government spending by record levels under non-COVID standards.

“Look at my predecessor, the great MAGA king,” Biden said of President Trump at the Chicago conference. “The deficit increased every single year he was president,” Biden went on, failing to illicit a reaction from his audience.

After Biden dubbed Trump the “Great MAGA King,” supporters of the 45th President took to social media to celebrate the new nickname, once again co-opting a failed left-wing hit for political gain. President Trump himself even thanked Biden for subbing him the “Great MAGA King” in a post to his Truth Social network.

“The Great MAGA King is the name Joe Biden is now using to describe me,” President Trump wrote in his post, known as a “Truth” on the platform. “Thank you, Joe. MAKE AMERICA GREAT AGAIN!”. 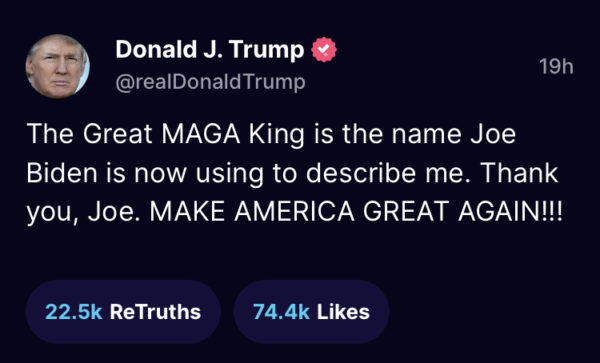