Pay To Play: Obama Offered $1 MILLION to FBI for ‘Dirt’ on Donald Trump

Pay To Play: Obama Offered $1 MILLION to FBI for ‘Dirt’ on Donald Trump

The FBI offered $1 million to former MI6 Agent, Christopher Steele, for corroboration and substantiation for the dossier claims. He could not provide any.

FBI Supervisory Analyst, Brian Auten, testified on Tuesday in the criminal trial case of United States v. Danchenko (1:21-cr-00245) at the Albert V. Bryan U.S. Courthouse in Alexandria, Virginia, that Christopher Steele, the author of the Russia Hoax Dossier, was offered $1 million by former President of the United States, Barack Obama, in order to obtain ‘dirt’ on then-President Donald Trump.

Auten testified in court that he never received the funds because he could not “prove the allegations,” against Trump.

According to Auten, the source of the faux dossier, former British Secret Intelligence Service (MI6) Agent, Christopher Steele, did not provide the names of any sources during his meeting with the FBI, nor did he give substantiation which could corroborate his claims in his now-debunked dossier.

Thanks to the faulty Steele Dossier and Operation Crossfire Hurricane, millions of American voters were falsely led to believe that Russian collusion was the cause of Donald Trump’s rise to the U.S. Presidency.

Danchenko pleaded not guilty to lying to the FBI as part of Special Counsel John Durham’s investigation.

The FBI reimbursed Christopher Steele for his expenses as an informant, and testimony in court this week revealed that the Bureau offered him $1 million in 2016 to provide corroboration for the allegations asserted in the dossier. Steele could not corroborate the claims.

It was in fact, Barack Obama, under whom whistleblowers became targeted by the government to an unprecedented degree.

Igor Danchenko was charged with five felony counts of making false statements to the FBI about the information sources he gave for the creation of The Steele Dossier.

FBI Special Agent Kevin Helson testified that Danchenko was paid handsomely by the FBI, as he received some $200,000 from the Bureau over the course of a three-and-a-half year timespan in which he served as a Confidential Source (CS) for the agency.

Despite the fact he worked for both the FBI and CIA, Carter Page insists that he was never paid.

“I was never paid one cent. Everything I did was to serve my country,” Page said. “I risked my life countless times for this country around the world, and was never paid one penny by the CIA, FBI, or any of the other U.S. intelligence agencies that I loyally served for many years.”

Durham provided evidence in September that the FBI was aware of Danchenko as early as July 2016. He also explained the connection between the Presidential Campaign of Hillary Clinton and the FBI’s Trump-targeted Operation Crossfire Hurricane.

Operation Crossfire Hurricane was the brainchild of Peter Strzok Jr., who one week prior had exchanged texts with fellow FBI Agent, Lisa Page, that showed their mutual disdain for Trump.

“Beginning in or about July 2016 and continuing through December 2016, the FBI began receiving a series of reports from former British government employee Christopher Steele and his firm, Orbis Business Solutions, that contained derogatory information on then-candidate Trump, concerning Trump’s purported ties to Russia,” the legal motion stated. 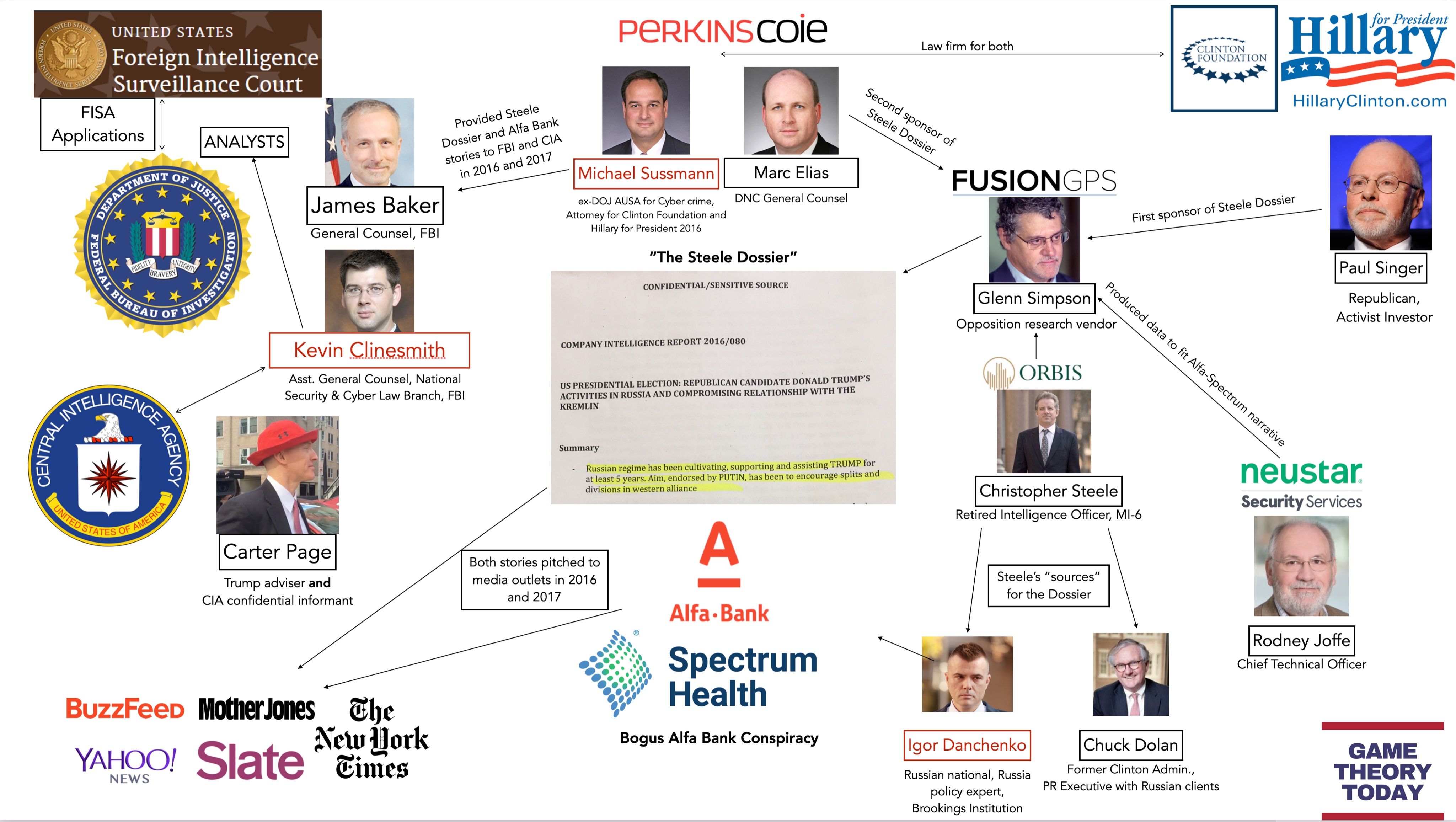 “Earlier that year, Perkins Coie, a U.S.-based international law firm, acting as counsel to the Hillary Clinton Presidential campaign, had retained Fusion GPS, a U.S.-based investigative firm, to conduct research on Trump and his associates. In or about June 2021, Fusion GPS, in turn, retained Steele and Orbis to investigate Trump’s purported ties to Russia. The Steele Reports played an important role in applications that FBI personnel prepared and submitted to obtain warrants pursuant to the Foreign Intelligence Surveillance Act (FISA) targeting Carter Page, a United States citizen who for a period of time had been an advisor to then-candidate Trump.”

During the 2016 US Presidential Campaign, former Trump campaign advisor, Carter Page, was spied on by the FBI for over a year but no charges were brought against him.

Carter Page was an advisor to the 2016 Donald Trump campaign. He is now revealed to be a Confidential Informant (CI) for the Central Intelligence Agency (CIA) and Confidential Source (CS) for the Federal Bureau of Investigation (FBI).

Former FBI lawyer, Kevin Clinesmith, pleaded guilty to alteration of an email about Carter Page which said that Page was “not a source” for another government agency, despite the fact that he was working with the CIA. Clinesmith was sentenced in 2021 to 12 months probation and 400 hours of community service.

“Over a fairly lengthy period of time, the FBI attempted to investigate, vet, and analyze the Steele Reports but ultimately was not able to confirm or corroborate most of their substantive allegations,” the motion said.

“In the context of these efforts, the FBI learned that Christopher Steele relied primarily on a U.S.-based Russian national, the defendant Igor Danchenko, to collect information that ultimately formed the core allegations found in the Steele Reports. From January 2017 through October 2020, and as part of its efforts to determine the truth or falsity of specific information in the Steele Reports, the FBI conducted multiple interviews of the defendant regarding, among other things, the information that he had provided to Steel.”

In the December 2019 DOJ’s Inspector General report on the FBI’s Operation Crossfire Hurricane,’ it concluded that the discredited Steele dossier was the justification used for “sensitive and intrusive” surveillance of Carter Page.

“[They] omitted the fact that Steele’s Primary Subsource, who the FBI found credible, had made statements in January 2021 raising significant questions about the reliability of allegations included in the FISA applications,” the motion said.

“[They] mitted Page’s prior relationship with another U.S. government agency (CIA), despite being reminded by the other agency (CIA) in June 2017, prior to the filing of the final renewal application, about Page’s past status with [the CIA},” the legal motion added.

“[They] mitted information from person who previously had professional contacts with Steele or had direct knowledge of his work-related performance, including statements that Steele had no history of reporting in bad faith but ‘demonstrates lack of self-awareness, poor judgement, that he ‘pursued people with political risk but no intelligence value,’ that he ‘didn’t always exercise great judgement,’ and that it was ‘not clear what he would have done to validate’ his reportage.”

The DOJ later admitted that two of the FISA warrants used against Page were not valid and that the Justice Department lacked the actual probable cause to surveil Page in the first place. Now Page is suing the DOJ and the FBI for damages over their surveillance.

In a new filing, Page says new evidence has come to light in the criminal case of Igor Danchenko.

It may seem as if Page was an innocent victim of unfair surveillance by the FBI, but he is in fact a Confidential Informant (CI) for the Central Intelligence Agency (CIA).

It stands to reason that Carter Page, and not Danchenko, is the true sub-source for the phony Steele Dossier.

Why was a CIA informant embedded in the Trump campaign from the start? It is unlikely that Trump was aware that Page was an informant for multiple domestic intelligence agencies.

5d. Fact: Carter Page was working as a confidential informant (CI) for the CIA. You don't slap FISA warrants on those folks. FBI consulted CIA on whether Page was a CI.

Garland is not the first investigative journalist to report on Page’s ties to the U.S. intelligence community.

“Carter was an FBI informant going all the way back to 2013 in the Podobnyy case. Danchenko hides Carter Page. Page was a plant in the Trump campaign,” investigative reporter George Webb said.

“We just learned in the Danchenko case from Durham’s latest filing, unsealed just today, that the defendant, Danchenko, was on the FBI’s payroll as a CHS from March 2017 through October 2020.” a twitter user reported on September 13. It was even reported that the FBI was aware of Danchenko as early as 2009.

Carter Page was an FBI informant going all the way back to 2013 in the Podobnyy case. Danchenko hides Carter Page. Page was a plant in the Trump campaign.

“Carter Page was an FBI informant going all the way back to 2013 in the Podobnyy case. Danchenko hides Carter Page. Page was a plant in the Trump campaign,” Webb asserted.

The reporter also relayed Peter Strzok II”s father, Peter Strzok Sr., was an intelligence agent for the Central Intelligence Agency (CIA) and partook in the overthrow of the Shah.

Peter Strzok II's father, Peter Strzok Sr., was a CIA Agent who helped in the overthrow of the Shah and was an integral part of the Iran Nuclear Deal. pic.twitter.com/WKcxADApUn

Ebgeny Buyakov was deported in April 2017 after he served a 30-month prison sentence and paid a $100,000 fine. His accomplice, Victor Podobnyy, fled the country along with one other Russian intelligence agent before they could be taken into custody.

Agent for the Russian Foreign Intelligence Service (SVR), Victor Podobnyy, had attempted to extract intelligence from Page and recruit him as a source, something which Page admitted himself.

The House Intelligence Committee referred to a July 2016 meeting between Page and the CEO of Rosneft, Igor Sechin, who is considered to be a “de facto deputy” of Vladimir Putin.

Page filed a lawsuit against the and the FBI, with regards to the FISA warrant abuse. The case was dismissed in September; however, Page and his legal team filed a motion to overturn the dismissal. The government has requested an extension to file a response.

“The level of deceit, cover-ups and corruption has now continued to reach all-time highs. This is typical of the same kind of revolving door politics which Chris Wray and his FISA abuse law partners have continued to play since the very beginning of the scandal,” Page declared.

Page added that the FBI has been “using taxpayer resources to support their political and business allies while putting the lives of innocent Americans at risk through this long, grueling process.”

The first half of this story was originally reported by El American and FOX News.