Records show that Democrat House Speaker Nancy Pelosi spoke at an event hosted by the Democratic Socialists of America (DSA), and gained the DSA’s endorsement in her 1996 campaign for Congress. (RELATED: Stanford Newspaper Archives Reveal Kamala’s Dad To Be A ‘Marxist.”)

Here is a clipping from page of 16 of the January/February 1996 issue of Democratic Left magazine, the official magazine of the Democratic Socialists of America, which states in part, “More than 300 Bay Area residents turned out for a public hearing on jobs and economic insecurity in San Francisco on November 11. Co-sponsored by San Francisco DSA and the Full Employment Coalition, the event featured Congresswoman Nancy Pelosi and Congressman Ron Dellums as keynote speakers.” 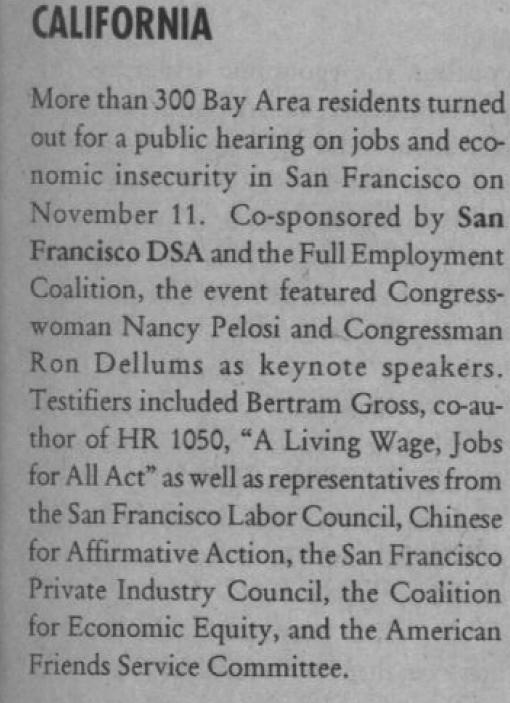 Here is a clipping from page 21 of the July/August issue of Democratic Left magazine which shows Pelosi gaining the DSA PAC endorsement for her 1996 U.S. House election in California’s 8th District. 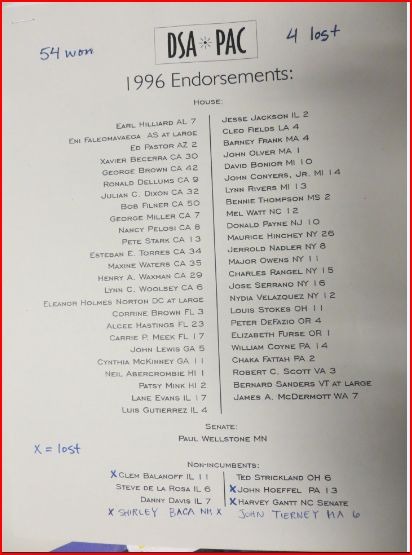 Democrat House Speaker Nancy Pelosi impeached President Donald Trump during the spread of the Coronavirus outbreak in the United States of America, while also encouraging people to socialize with her in the Chinatown district of San Francisco, where she visited a fortune cookie factory to portray her supposed opposition to bigotry and xenophobia.

The CDC confirmed the first U.S. case of the Chinese virus on January 21, in Seattle from a man who got back from Wuhan, China. Incidentally, the House impeachment managers kicked off opening arguments in the Trump “Ukraine”-focused impeachment trial two days later on January 23.

Pelosi told people to “Come join us!” during her Chinatown jaunt on February 24, which featured her aforementioned fortune cookie factory visit.

This was on February 24. Nancy Pelosi encouraged people to go to Chinatownhttps://t.co/JghyaWmGsT

It was a pleasure to try my hand at making fortune cookies at the Golden Gate Fortune Cookie Factory (with a little guidance from owner Kevin Chan, of course).

During a recent round of stimulus spending, Pelosi attempted to stall the Republican-backed plan in an effort to pass elements of the Green New Deal.

Several sharp-eyed social media users who had the fortitude to browse through the massive bill found bizarre provisions, including writer Rachel Bovard.

“Pelosi’s #COVID19 bill is 1,119 pages and contains provisions for “conducting risk-limiting audits of results of elections” so yeah it’s really very focused on the crisis at hand,” Bovard said in a thread that compiled screenshots of various provisions in the bill.

After proposing a bailout for the postal service, the Democratic bill includes sections about paid studies of “pay equity” between “racial and ethnic minorities” and their “white counterparts,” as well as a “comparison of pay between and women for similar roles and assignments.”