"So you pass a test very few of us would pass, Dr. Anthony Fauci, thank you for spending some time with us talking about all of it, we're always grateful to get some of your time."

MSNBC host Nicole Wallace secured the first interview with Anthony Fauci since months worth of his emails were released to the public via a FOIA request yesterday, and despite multiple smoking guns making many question Fauci’s handling of the COVID-19 pandemic, she declared that his emails made him “look good” and that his inbox is above reproach.

“I read through your emails that were released,” claimed Wallace, ostensibly suggesting she read all 3,200 pages of emails released yesterday. Wallace then referenced Fauci’s email where he seemed shocked to learn that he would go four entire days without hosting a COVID-19 Task Force press conference alongside President Donald Trump and other White House officials.

“I wonder if you feel like you’re still making up some of that lost ground from many months under the last administration from not just no information but disinformation out there,” Wallace then asked. “There’s no doubt that there are people out there who for one reason or other resent me for what I did in the last administration,” admitted Fauci, before claiming that he did nothing “anti-Trump at all.”

“The true mark of someone is that they look good even when their personal emails come out,” said Wallace, while laughing and smiling at the decades-long government employee. “So you pass a test very few of us would pass, Dr. Anthony Fauci, thank you for spending some time with us talking about all of it, we’re always grateful to get some of your time.”

MSNBC’s @NicolleDWallace scores the first interview w/ Fauci since his emails were made public and uses it to say: “The true mark of someone is if they look good even when their personal emails come out, so you pass the test very few of us would pass." pic.twitter.com/SNMXBrXm5v

While Fauci refrained from ever saying something that could be conceived as anti-Trump in his emails, he agreed with multiple people who emailed him and criticized the Trump administration and 45th President Donald Trump’s handling of the COVID-19 virus. Several of his emails have also revealed troubling developments about how he handled the pandemic.

In one email, Fauci promised a Florida HIV doctor that he would pressure President Trump to convince Florida Gov. Ron DeSantis to close bars, gyms, and beaches after the Florida governor initially refused to pursue a full lockdown. On February 5, 2020, Fauci advised a former Obama administration official and former employee of the Bill & Melinda Gates Foundation not to wear face masks, noting that COVID-19 was larger than the fabric in most face masks and thus they would be irrelevant. The email also shows a stunning level of collaboration between Fauci and Facebook CEO Mark Zuckerberg, who thanked Fauci profusely for his “leadership” and offered to use Facebook to help Fauci spread his message to “2.5 billion people worldwide.”

Perhaps most startling is an email between Fauci and CDC official John T. Brooks, which shows March Madness brackets filled in instead with viruses and diseases, and shows COVID-19 as the “champion” with Fauci’s name next to it. 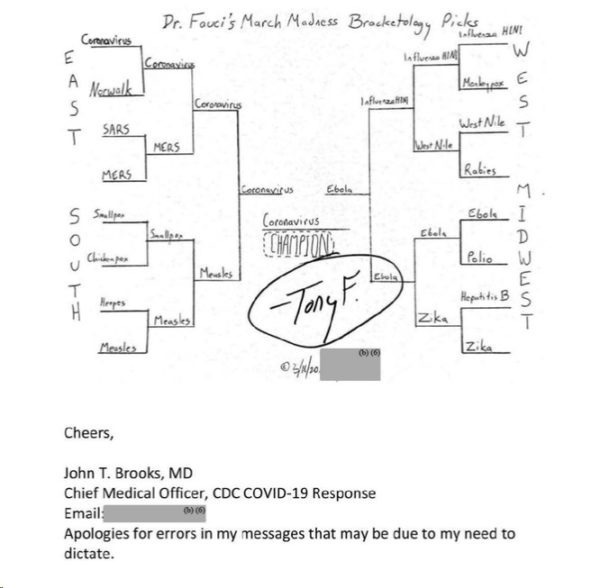