Finstad is calling himself a pro-Trump, America First candidate for Congress, but has a long history of supporting anti-Trump, America last positions and didn’t even vote in the 2020 GOP Primary

Brad Finstad is portraying himself as a pro-Trump, America First conservative while he runs for Congress in Minnesota’s 1st District. Finstad, however, has a history of taking anti-Trump stances and didn’t even vote in the 2020 Presidential Primary.

Finstad has spent much of his life in government and is running in the 1st District’s special election to serve out the remainder of a term won by a truly pro-Trump, America First conservative, Rep. Jim Hagedorn, in 2020. Hagedorn passed away in February of this year after battling cancer and stood as an ardent supporter of President Trump on Capitol Hill during his time in Congress, which had only begun after he flipped the 1st District in 2018.

In the special election race, the GOP will choose their nominee in a May 24th primary, and after a short campaign period, the special election will be held on August 9th to determine who will serve out the last few months of Hagedorn’s term. Also on August 9th, the GOP will select their nominee for November’s 2022 mid-term election, which will still take place as scheduled.

As the campaign for the open seat takes shape, former state legislator and federal bureaucrat Brad Finstad is trying to establish himself as the pro-Trump candidate who will take the people’s America First agenda to DC – quite a reversal from the Brad Finstad who is on record with anti-Trump stances on Twitter and who didn’t even bother to vote for him in Minnesota’s 2020 Presidential Primary.

Finstad is touting his former position as a US Department of Agriculture bureaucrat appointed by the Trump Administration on the campaign trail in an attempt to endear himself to Trump and his supporters. That campaign tactic mirrors the ones used by seemingly countless RINOs and even outright Never Trumpers who reportedly flooded the Trump Administration with job applications for bureaucratic positions – like the one Finstad held – looking to bone up their conservative credentials before launching their own runs for office.

While he claims on his campaign website that “Brad Finstad supports Pres. Trump’s America First agenda and will work to put Americans’ best interest [sic] first at home and abroad,” like his voter history, Finstad’s Twitter account tells a much different story.

In 2019, while Brad Finstad was working in the Trump Administration’s Department of Agriculture, he liked an anti-Trump tweet opposing the construction of the border wall supported by Trump and the American people alike from former Bush Administration official Ari Fleischer.

“Don’t give Trump his wall,” Fleischer wrote to Finstad’s apparent delight, going on to suggest that Democrats be given a “win” on the issue by Republicans and that President Trump be removed from the border wall design and construction process altogether. To this day, the Tweet remains in Finstad’s “likes” tab, and his approval of it is visible to all Twitter users. 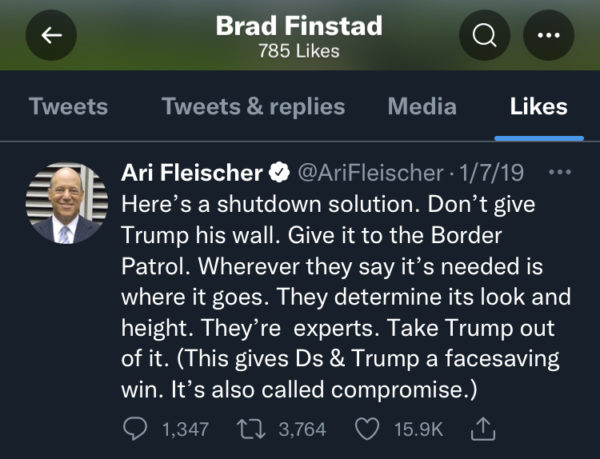 In 2021, while up to a million American citizens took to Capitol Hill to protest the certification of contested Electoral College votes and expose documented election fraud, Brad Finstad sat on Twitter affirming his support for turning the military loose on American citizens and liking Tweets from Never Trumpers like Tim Pawlenty, who was parroting left-wing talking points on the days’ events.

All the while, Rep. Hagedorn, the man Finstad wishes to replace, fought for America’s election integrity. The late congressman ultimately objected to the certification of results in contested states even as the GOP establishment demanded he acquiesce to the radical left. Hagedorn refused, saying the US Constitution was at stake. 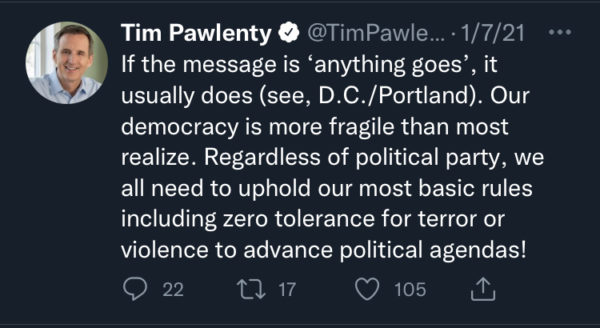 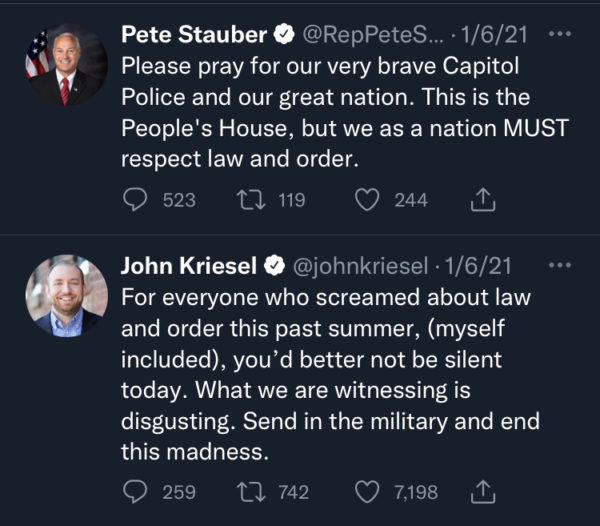 In the race to finish out Rep. Hagedorn’s term and carry the 1st District’s GOP banner into 2022, Brad Finstad will face multiple candidates, including Jim Hagedorn’s widow, Jennifer Carnahan. Carnahan, like her late husband, is a major supporter of President Trump and the America First agenda and has the backing of much of the district’s grassroots conservatives.

Prior to launching her run for office, Carnahan served as the pro-Trump chair of Minnesota’s GOP and is credited with helping shape much of the state’s massive shift towards the Republican Party as the Carnahan-led GOP flipped three Congressional seats and eliminated $1 million in debt during her tenure. It was her husband Jim Hagedorn’s dying wish, she says, for her to finish out his term and go on to advance the America First agenda for the people of Minnesota’s 1st District.