The Flynn-backed America First candidate has officially requested a recount in the VA AG race, citing a "need for transparency of the voting process."

America First firebrand and Flynn-backed Republican candidate for the Attorney General of Virginia Chuck Smith has officially called for a recount citing “a lot of confusion” surrounding the integrity of the race for AG.

Smith appeared to be narrowly defeated by Virginia Delegate Jason Miyares (R-Virginia Beach) in the third round of voting during the Virginia Republican convention. The race was reportedly “closer than most political observers had anticipated” as concerns over election integrity continue to mount following evidence of widespread voter fraud in the 2020 election.

Smith released a statement today officially requesting a recount after “a lot of confusion in and among the tellers counting in the 3rd round.” 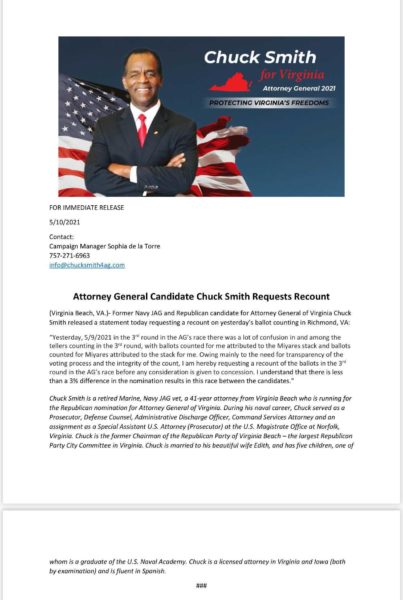 “Yesterday, 5/9/2023 in the 3rd round in the AG’s race there was a lot of confusion in and among the tellers counting in the 3rd round, with ballots counted for me attributed to the Miyares stack and ballots counted for Miyares attributed to the stack for me,” wrote Smith. “Owing mainly to the need for transparency of the voting process and the integrity of the count, I am hereby requesting a recount of the ballots in the 3rd round in the AG’s race before any consideration is given to concession.” He added, “I understand that there is less than a 3% difference in the nomination results in this race between the candidates.”

General Michael Flynn recently endorsed Smith for Attorney General of Virginia in a new video. “You see this flag right here? That’s why I’m standing here, to endorse Chuck Smith to be the Attorney General, because Chuck understands that flag. He understands service to the nation,” said Flynn. “Chuck is fully aware of the problems that Virginia is facing, and as I have said many times, we are in a major transition point in this country where we are going to continue to practice this great experiment of democracy called the Constitutional Republic, or we are going to move towards socialism, and likely communism, if we don’t get the right people, the right fighters into office.”

Virginians concerns over election integrity have made it to the forefront of the Republican conversation after it was discovered that on election day of last year, 300,000 Biden votes were counted in a series of five suspicious late-night ballot drops, with one of those dumps accounting for 73% of all Biden votes in Fairfax County, as National File reported. Strong America First Flynn-backed candidates in Virginia like Smith, as well as Republican candidate for Governor Amanda Chase, are seeking to win the upcoming elections as the state has seen few Republican victories since 2009.

Chase, a Virginia State Senator, has pledged to call for a full audit of the vote if she does not receive the nomination as the Governor of Virginia. Chase has also warned Virginians against the RPV rigging the election process in favor of RINO candidates such as Mirayes and Pete Snyder.

If RPV steals this election for Pete I still have plenty of time to run as an independent. Clear corruption by RPV, I will not honor a pledge if the Party cannot run a fair process.