McCarthy-backed Congressional candidate Jen Kiggans has refused to show up to GOP candidate forums with her primary opponents and is even sending an establishment ex-Congresswoman to debate for her by proxy. Kiggans has spent much of the 2022 campaign ducking for cover over her left-wing State Senate voting record, which includes support for opening girls’ restrooms up to men.

Jen Kiggans was notably absent from the stage at the recent Tidewater Libertarian Party’s GOP candidate forum, but the moderator was unphased and wasted no time in asking the GOP field their opinions on the 2020 election and GOP leadership – a subject that Kiggans’ front-running grassroots opponent Jarome Bell welcomed with open arms.

“My number one issue is that the election was stolen,” Bell said during the debate. He then called for forensic election audits in all 50 states to truly get to the bottom of the 2020 election. “We need to find out exactly what happened on November 3rd, 2020 because if we don’t find out what happened in 2020 it will affect the 2022 elections and any election going forward,” the GOP hopeful continued.

“And as far as Speaker of the House goes, I am not a Kevin McCarthy fan,” Bell went on to say, before challenging the two primary opponents that did show up for the debate to denounce the anti-Trump establishment leader as well and vow not to support McCarthy for Speaker of the House should they make it to Congress. “Because Kevin McCarthy is a traitor to the United States,” said Bell.

“I will vote for a House Freedom Caucus member [for Speaker of the House],” Bell went on, promising to help spearhead the America First conservative movement’s ascendency to the top levels of Congress.

Though she failed to show up for the candidate forum, Jen Kiggans’ long record of support for Kevin McCarthy and the GOP establishment that is backing and bankrolling her campaign separates her from the rest of the pack. While Kiggans says she will support McCarthy for Speaker of the House and calls him a “leader” in her “fight,” Bell has, quite obviously, been vocally opposed to the anti-Trump status quo. During the Tidewater Libertarian Party’s GOP forum, Bell challenged primary opponents Andy Baan and Tommy Altman to disavow Kevin McCarthy and promise voters they’ll support someone else for Speaker of the House, something Altman danced around doing despite claiming he’s running a grassroots, America First campaign for Congress.

As previously reported by National File, establishment leader Kevin McCarthy met national disgrace as he was exposed for working with Liz Cheney to remove the duly elected 45th President of the United States, Donald J. Trump, from office. Interestingly enough, considering the recently disclosed actions of the biggest “leader” in her “fight,” Jen Kiggans has refused to even utter President Trump’s name and says she isn’t backing him for President in 2024.

After failing to show up for the Tidewater Libertarian Party’s GOP candidate forum, Kiggans caught flack from voters and her opponents alike. Regardless, she’s decided not to show for the subsequent Virginia Beach Republican Women’s Club forum as well, though this time, she’s sending a “representative” to debate and speak for her by proxy. According to the candidate forum event page, Kiggans will be sending in ex-GOP establishment Rep, “The Honorable” Thelma Drake, who served two terms for the 2nd District in Congress before losing in 2008 to Democrat Glenn Nye. Nye went on to spend just a single term on the hill, being bounced himself in 2010.

National File reached out to Senator Kiggans for comment on this article and to ask her why she refuses to show up for candidate forums and to debate her primary race competition, but received no response by the time of publishing. The winner of the 2nd District’s GOP primary will face vulnerable Democrat incumbent Elaine Luria in November’s midterms. Despite Luria’s documented ties to Chinese Communist espionage and status as a close Pelosi ally on the 1/6 Committee, Kiggans has repeatedly indicated she’d rather that Luria and the Democrats hold the seat than her primary opponents within her own party. 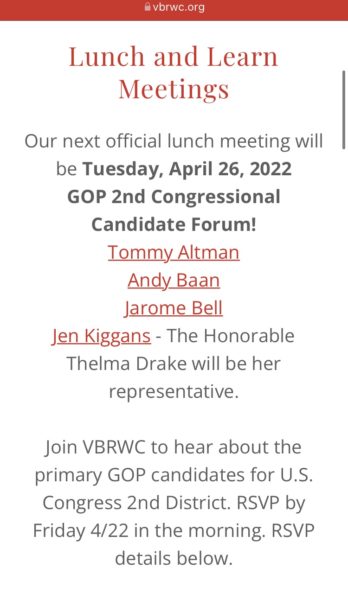