America First conservative Jarome Bell has been endorsed by Freedom Caucus Rep. Bob Good (VA-5) in his GOP primary race against Jen Kiggans in Virginia’s 2nd Congressional District. As a retired Navy Chief, Bell’s grassroots campaign has won the support of America First icons, all while Kiggans is backed by establishment figures like Kevin McCarthy and his dark money allies.

“Chief Bell will fight to protect the unborn, secure our Southern Border, support parental control of education, and defend the Second Amendment,” Good said in announcing his endorsement of Jarome Bell, who has made all of those issues central to his campaign.

In contrast, Jen Kiggans cast the deciding vote passing the so-called Equal Rights Amendment in the Virginia State Senate, which would allow for abortion on demand. She also voted for the Democrats’ Virginia Values Act, opening girls’ restrooms up to men and helping to pave the way for the serial rape of Loudoun County schoolgirls by a “gender-fluid” male peer who donned a skirt.

“He has pledged to join the House Freedom Caucus, and will be another courageous warrior fighting in Washington for our true conservative principles and to defeat the radical left,” Good’s endorsement of Bell went on, pointing to another major factor separating the campaigns of Bell and Kiggans.

Throughout the 2nd District’s primary season, Bell has vowed to join the Freedom Caucus and support one of its members for Speaker of the House when he is elected to Congress alongside a GOP majority. On the other hand, Kiggans has repeatedly promised to support Kevin McCarthy, who financially backs and bails out her campaign, for Speaker of the House and refuses to back a Trump 2024 run for President.

Good’s endorsement of Jarome Bell marks the first in the 2nd District race from any one of Virginia’s sitting congressional Republicans. It also sheds further light on the fact that Jen Kiggans’ support has come from far-off establishment figures, like Kevin McCarthy and Elise Stefanik, or the dark money Congressional Leadership Fund; not Virginia-tied conservatives, and certainly not a Freedom Caucus member who represents a Virginia district in Congress.

In comments made announcing Good’s endorsement of his campaign, Bell said that he was “honored to have the support of such a staunch social conservative like Bob Good,” and appeared to take aim at Kiggans’ backers when he said he looks forward to working with Rep. Good on “gutting the swamp in both parties.”

“Bob has been attacked by the establishment from both parties, so he knows it will take a fighter to get things done in D.C. in the face of opposition who want either quiet back-benchers or vocal phonies who pretend to do heavy lifting but who cave when the rubber meets the road,” Bell said, obviously counting Kiggans and her ilk among the backbenchers and phonies. “I look forward to going to work with Bob and gutting the swamp in both parties,” Bell continued.

The 2nd District’s GOP nominee will face-off against incumbent Democrat and 1/6 committee member Elaine Luria this November. Though it has been considered one of the most competitive seats in the nation, newly drawn district lines appear to shift the purple district to the right, adding one more hurdle to Luria’s bid for re-election, which has been dogged by revelations of her deep financial ties to Chinese Communist Party espionage efforts and Big Tech. 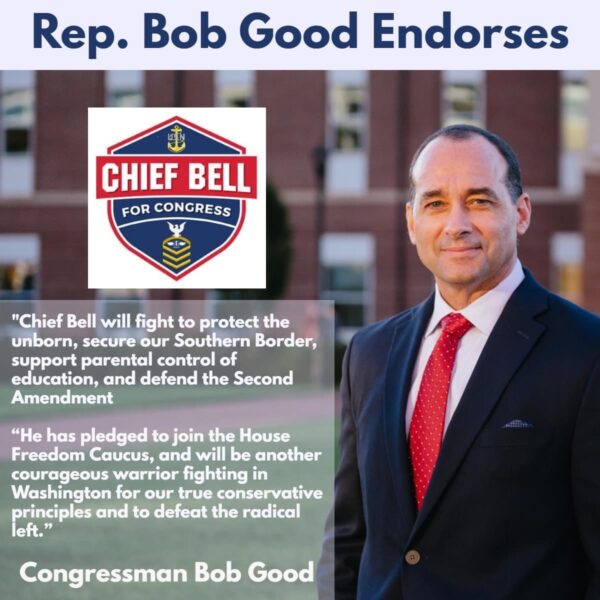