The Arizona Maricopa County Elections Department held a press conference on Wednesday night that attempted to address the problems with ballot tabulators and polls stations that plagued voters on election day in Maricopa County, Arizona.

The issue with the printers affected about seven percent of Election Day votes.

According to Maricopa County, some of the ballots submitted could not be read by the tabulators because the printers could not produce sufficiently dark “timing marks” on the ballots.

“[To] be clear on what Box 3 is, these are the ballots, in-person ballots yesterday that were not read into the tabulator. We have approximately 17,000 of those ballots that were in Box 3. So we want to set expectations on that,” Gates said.

“All ballots affected will be counted securely and accurately,” Maricopa County said.

“[The] first thing is the team here now is going through quality assurance on those ballots, making sure we don’t have any double counts, making sure we know exactly what we’re looking at here. To talk about the full number of in-person ballots yesterday, we have about seven percent of the total of in-person ballots yesterday that went into Box 3. So that’s 17,000 ballots, [which] is about seven percent. 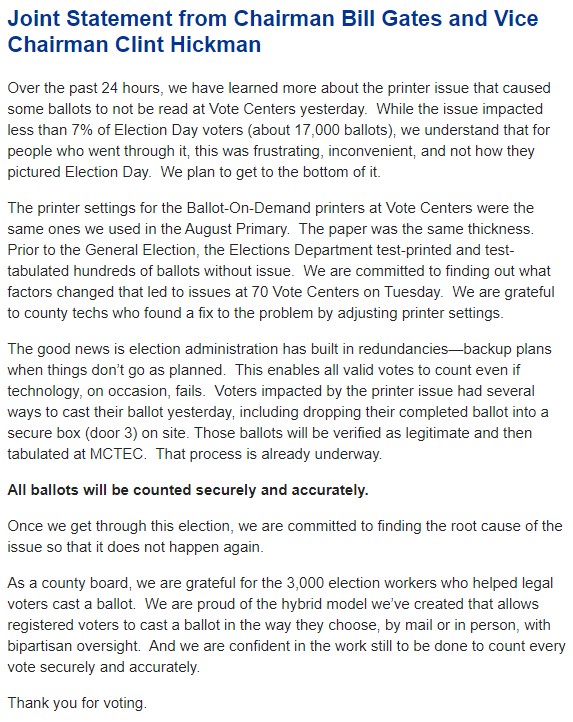 “We had voters who showed up in person to take a ballot, vote it, and feed it into the tabulator and for those who were not able to run that into the tabulator, they put that what we call Box 3, what we discussed earlier,” Gates continued.

“So that was around, a little bit over 250,000 ballots. In addition, we also had people that received an early ballot. That’s what [Maricopa County Recorder Stephen Richer] was talking about,” Gates said. “As opposed to going in and actually feeding the ballot through the tabulator, they actually brought in that ballot.”

The County of Maricopa stated that the disenfranchised voters had “several ways” to cast their ballot, which includes dropping the ballot into Box 3.

“Those ballots will be verified as [legitimate] and then tabulated at MCTEC,” the county stated. “The process is already underway.

“What happened yesterday, we cannot have a repeat of. We are already looking very closely at what happened. Obviously, our team was able to come up with a fix yesterday for what happened. So that allowed those vote centers to get back online, but again, we are going to do a deep dive on this,” Gates stated. “This board will get to the bottom of exactly what happened, and we will do what needs to be done. The board has demonstrated that in the past when we have had issues, and we will do that again.”

The printer issues affected 70 polling locations across Maricopa County and the county stated it does not know why it happened.

“The printer settings for the Ballot-On-Demand printers at Vote Centers were the same ones we used in the August primary. The paper was the same thickness,” Gates asserted. “Prior to the General Election, the Elections Department test-printed and test-tabulated hundreds of ballots without issue, We are committed to find out what factors changed that led to issues at 70 Vote Centers on Tuesday.”