Macron is mad because President Bolsonaro laughed at a meme on Facebook.

French President Emmanuel Macron was visually upset at a press conference on Monday about a comment made by Brazilian President Jair Bolsonaro’s official Facebook page.

Tensions have already flared between the two world leaders this week, as Brazil has been caught in a media blitz following reports of massive wildfires engulfing the Amazon rain forest.

Most of the viral photos claiming to show the hellish destruction of the Amazon have been proven to be fake, including one tweeted out by Macron on Saturday that was actually taken by a photographer who had been dead for sixteen years.

Many Bolsonaro supporters have been angered by what they perceive as meaningless virtue signalling by left-wing media and world leaders, with Macron becoming a lightning rod for memes and jokes poking fun at his ignorance.

Macron is 41, and the two met while he was still a student and she was his teacher. 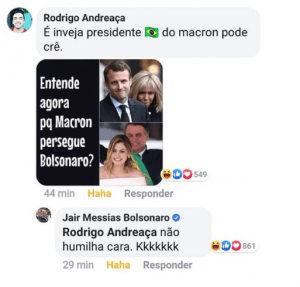 Macron appeared to be visibly shaken by this comment in a press conference Monday, where he said, “For him to have made incredibly disrespectful comments about my spouse — what can I say to you?” in response to a question about President Bolsonaro.

President Bolsonaro also criticized Macron in a tweet on Monday morning, claiming the latter was disguising his intentions “behind the idea of an ‘alliance’ of the G7 countries to ‘save’ the Amazon, as if we were a colony or no man’s land.”