"She was our Princess Leia"

Liberals on Twitter are mourning Ruth Bader Ginsburg in their own way, comparing her to characters from Marvel, Star Wars, and Harry Potter.

Bader Ginsburg was confirmed to have died from pancreatic cancer on Friday afternoon at the age of 87, causing many across politics to mourn her life.

President Trump paid tribute to Bader Ginsburg in the normal fashion, telling reporters as soon as he heard that she was an “amazing woman,” and was sad to hear of her passing.

WATCH: Trump hears from a reporter that Justice Ginsburg has died.

"She just died? Wow. I didn't know that, you're telling me now for the first time."

"She led an amazing life. What else can you say? She was an amazing woman…I'm sad to hear that." pic.twitter.com/5Na3vHzP7f

However, liberals decided that the best way to mourn Bader Ginsburg on Twitter was to compare her to characters from all across pop culture.

One tweet that first garnered a lot of attention, involved a 10 year old daughter doing the “Wakanda” pose, while saying “Ruthkanda forever,” although the author of the tweet has now locked her account. The reference comes as the actor who played the titular Black Panther, Chadwick Boseman, passed away last month. 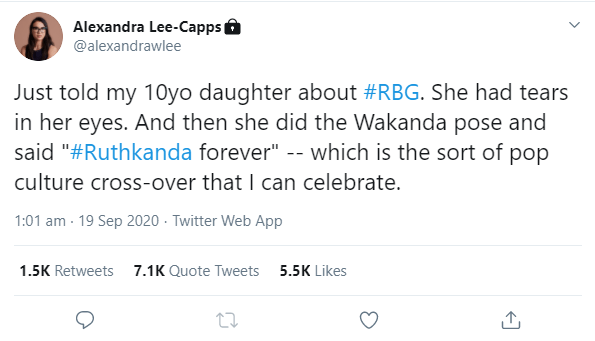 As if someone didn't already have this idea pic.twitter.com/LJbgNQAFlg

Some liberals declared on Twitter that the death of Bader Ginsburg was akin to the falling of the Ministry of Magic in the Harry Potter series, with Ginsburg herself being compared to Professor McGonagall by some.

Ruth Bader Ginsburg is dead. The Ministry of Magic has fallen… They are coming.

The ministry of magic has fallen pic.twitter.com/WohGGAWr0K

With RBG dead the ministry of magic falls and so too Hogwarts. Whoops, I meant the federal government. I got them mixed up because they both work only in fiction.

Another popular comparison was Princess Leia from Star Wars. “The force will be stronger now that she can be part of it,” one person told their friend in a text.

I’m sitting here struggling for words and my friend nailed it: “She was our Princess Leia” #RBG pic.twitter.com/K23CDxb6VQ

RBG was a real-life Princess Leia. She paved the way for equality, women’s rights and for others to follow her footsteps. The force is stronger because of her and the impact she left will be everlasting. Rest In Peace, Ruth Bader Ginsberg💞 https://t.co/HFpdwa63s5

I feel like I am in the Terminator movie and Sarah Conner just died ….
Or in Star Wars and R2D2 was reprogrammed and never delivered Princess Leia's message to Obi Wan….#screwed

Love and light to RBG and her loved ones .

My son just got home from work. “What’s wrong mom?” he said. “RBG died” I said. “She was the real life Princess Leia” (so he understood). “Her force ghost is still here”, he assured me. And now I’m crying. #RIPRBG

Another section of Twitter involved conversations with the (potentially imaginary) daughters of liberal Twitter, where the authors of the tweets declared just how sad their children were. One even said their 4 year old daughter said Bader Ginsburg was just like the rabbit lead character from Zootopia.

Just told my 4yo daughter that RBG died and her question to me was “Why do heroes have to die?” The only answer I had was, “to make new heroes.” It felt like a lame explanation but as I sit with that answer, it feels right. We’re going to need as many new heroes as we can get.

I told my daughter a few things about RBG and how lucky we are to have had her fight for us for her for so long. After patiently listening she said, "But even though she died, she still loves us." I think that's exactly right.

My (adult) son came in to tell us as soon as he heard the news. My husband came in crying wearing his favorite t-shirt. pic.twitter.com/4j9ScESeWG