'Repeat violations of ballot counting procedures' lead to a lawsuit against the Dallas County Elections Office.

“Voters deserve to see how their ballots are counted,” Gooden said in a statement provided to the press. “Democrat-run governments on every level will do anything to tip the scales in their favor. We’re not going to let them get away with it.”

The lawsuit is going straight to the Supreme Court of Texas which is rare, but under the circumstances and the need for urgencies in a verdict this case isn’t being presented to lower courts first 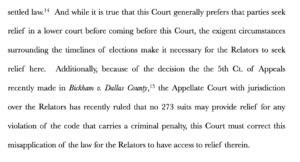 The Texas republican poll watchers have on numerous occasion not only been denied access to view the mail-in ballot counting, but have been removed from the premises entirely by force from local law enforcement. These issues are all being addressed in the current lawsuit citing Texas Election Code violations.

The lawsuit brought forth by Gooden, and Rodney Anderson specifically addresses three main points of contention.

“Unfortunately, those who question the process are often immediately labeled as ‘sore losers. This is not about winning or losing – this is about speaking out for what is right. I’m grateful to my constituents for re-electing me to serve another term in Congress, and I feel an even greater responsibility to fight voter fraud,” says the statement from Gooden concerning the lawsuit in Texas.

“Voters deserve to see how their ballots are counted. Democrat-run governments on every level will do anything to tip the scales in their favor. We’re not going to let them get away with it.”

Additionally, the lawsuit brought forth by Gooden and Anderson seek to rectify the decision made by the 5th Circuit of Appeals made during Bickham v. Dallas County. The ruling dictates that there will not be any criminal penalties in responses to violators of Section 273.

Someone who has the capacity to violate Section 273 is able to evade criminal penalty.