The Hunter Laptop Is Haunting

Joe Biden faces revelations that he was personally involved in discussions regarding his family’s dirty overseas business dealings, according to email communications found on Hunter Biden’s laptop that have been reviewed in their entirety by NATIONAL FILE. (RELATED: Biden Secretary of State Shows Up On Hunter’s Laptop, Managed Anonymous Chinese Donations to Biden Project).

“Don’t mention Joe being involved,” one of Hunter’s business partners James Gillar told another Hunter business partner Tony Bobulinski in a WhatsApp text message, referring to Hunter’s overseas dealings. As we reported, Hunter Biden’s business dealings link him to Chinese espionage against America, with Joe Biden personally meeting the CEO of a Hunter firm that invested in a Chinese nuclear power company that the Obama DOJ charged with trying to steal American nuclear secrets.

Joe Biden’s documented involvement in Hunter schemes draws even more alarming scrutiny on an email that showed up on Hunter Biden’s laptop from October 1, 2017. In the email, Joe Biden’s brother Jim informs Hunter that he spoke with “your father” Joe Biden. It must have been a good conversation because, as Jim says, “We have the two biggest days of our business life in front of us!!!!!”

“You need to call me now. Just got off the phone with your father. He is meeting with the O!! Some outrageous acquisitions!! We have the two biggest days of our business life in front of us!!!!!,” Jim Biden wrote to Hunter in the subject line of the email.

“You / me we have to deal with this now!!!!! I not kidding. They (Joe) have the Buccini’s being called by your landlord. It get much more outrageous!! You have to let me in to help! I’m with you 100%. , trust me, you need me in on this!! We/ you have to much to loose, we must be smart, or everything goes up in smoke! Please call me. You MUST remain calm. Timing could not be worse.. Calm and measured!!!! paybacks can come later,” Jim Biden informed Hunter in the body of the email. 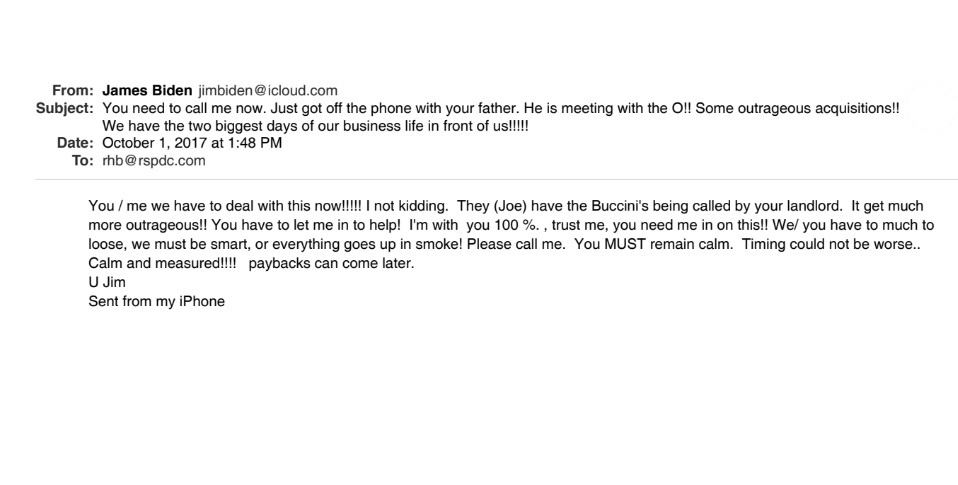 Speculation exists as to the identity of “the O.” Clearly, we know that Barack Obama has a more prominent seat at the global power table than his former underling Joe Biden, who is mostly a puppet propping up the neoliberal Democrat regime that formed both the Obama and Biden administrations. In fact, Biden even said that he never disagreed with Obama when Biden was vice president or else he would have claim to have developed some kind of disease and resigned. Kamala Harris shook her head as Biden admitted this.