The Life and Family Foundation in Poland plans to appeal their case as 3 LGBT activists were acquitted after they distributed blasphemous depictions of the Blessed Mother.

Nearly 5 years after Our Lord Jesus Christ was officially coronated King of Poland, a Polish court acquitted 3 LGBT activists who produced and distributed blasphemous images of the Blessed Mother. The conservative group known as the Life and Family Foundation plans to appeal their case.

On Tuesday, a Polish court acquitted three  LGBT activists who were accused of desecration and discriminating against the Catholic religion after they subsequently produced and distributed images and posters of the Roman Catholic Blessed Mother in front of the LGBT rainbow. The group that filed the suit plans to appeal the decision and push back against the court.

The court, based in the city of Plock, says that they did not view the actions as criminal. In their view, the activists were taking a stand against the discrimination of LGBT people, according to Polish media. The activists had depicted the Blessed Mother and Baby Jesus with the famous LGBT rainbow as Halos. 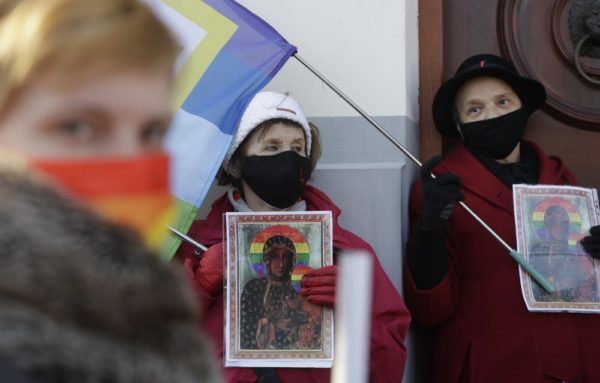 The Polish conservative group, known as the Life and Family Foundation, announced that they plan to appeal their case. “Defending the honor of the Mother of God is the responsibility of each of us, and the guilt of the accused is indisputable,” said the group’s founder, Kaja Godek. “The courts of the Republic of Poland should protect (Catholics) from violence, including by LGBT activists.”

If the three activists, Elzbieta Podlesna, Anna Prus and Joanna Gzyra-Iskandar, are found to be guilty, they could face up to two years in Polish prison.

The blasphemous images depicted Poland’s nationally adored icon, the Mother of God of Czestochowa, also known as the Black Madonna of Czestochowa. The original Roman-Catholic depiction has been housed at Poland’s holiest site since the 14th century at the Jasna Gora monastery in Czestochowa.

Protestors have touted the perverted depictions during street demonstrations, thus contributing to the growing popularity of the images in Poland, where Our Lord Jesus Christ was officially coronated King of Poland in November 2016.

This would not be the first time that the Polish have behaved in a manner that young Christian conservatives in the United States would describe as “incredibly based.” In April 2020, the Polish government entertained legislation that would criminalize sexual education taught in schools, citing the “promotion of underage sexual activity,” as National File reported:

“Protesters gathered to demonstrate against the proposal, dubbed the “Stop Pedophilia” law, which could see sexual educators face prison sentences of up to five years if found guilty.

The purpose of the legislation is to “criminalize the promotion of underage sexual activity” suggesting that sexual education teachers “groom and familiarize children with homosexuality,” according to LGBTQ Nation.”

“A few months later in October, radical leftist protestors clashed with Catholic pro-life traditionalists in Poland, in a situation that turned very strange after the leftists began to literally bark at the Catholics, as National File reported.

As a result of Poland’s groundbreaking new anti-censorship law, Big Tech companies may face up to $13.5 million in fines if they are found to have illegally censored Polish citizens, as National File reported.

“The law, introduced by Poland’s ruling Law and Justice Party (PiS), would focus on protecting their citizens from political over-reach by Big Tech organisations, preventing any users in the country from having their accounts or posts blocked and removed if the motive for doing so was political.”