"Mitch McConnell, the most unpopular politician in the country, who only won in Kentucky because President Trump endorsed him. He would have lost badly without this endorsement."

On Thursday afternoon, President Donald Trump released another statement bashing Senate Minority Leader Mitch McConnell, who he previously described as a “dour, sullen, and unsmiling political hack”. In the latest statement, responding to false accusations from the Wall Street Journal that he is responsible for the loss of two Republican Senate seats in Georgia, lays the blame squarely on Republican Governor Brian Kemp and McConnell.

President Trump then sought to “set the record straight” on why the Republican Party lost the two Georgia Senate seat. “First, Republicans did not turn out to vote because they were so angry and disappointed with Georgia Republican leadership and Governor Kemp for failing to stand up to Stacey Abrams and the disastrous Consent Decree that virtually eliminated signature verification requirements across the state (and much worse),” President Trump wrote, which he says led to “a rigged election.”

Then, President Trump proceeded to explain how McConnell – the leader of the Republican Party in the Senate – bungled the race by refusing to recognize political realities.

“Second, Senator Mitch McConnell’s refusal to go above $600 per person on the stimulus check payments when the two Democrat opponents were touting $2,000 per person in ad after ad. This latter point was used against our Senators and the $2,000 will be approved anyway by the Democrats who bought the Georgia election—and McConnell let them do it!” President Trump added, “Even more stupidly, the National Republican Senatorial Committee spent millions of dollars on ineffective TV ads starring Mitch McConnell, the most unpopular politician in the country, who only won in Kentucky because President Trump endorsed him. He would have lost badly without this endorsement.” 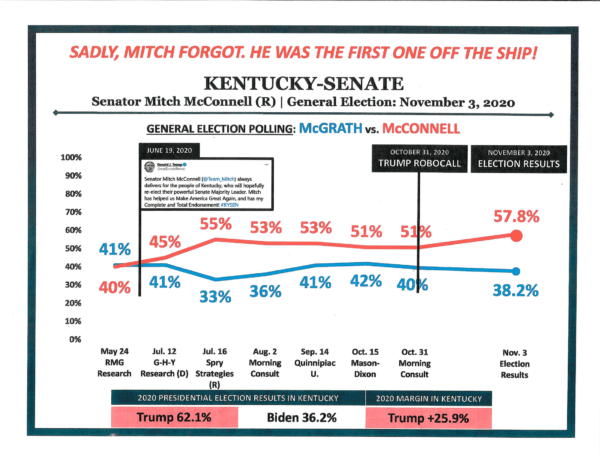 Sen. Lindsey Graham, a strong ally of McConnell and lukewarm ally of President Trump, recently traveled to the President’s Mar-A-Lago estate in Florida for the purpose of convincing President Trump to abandon his feud with McConnell, despite McConnell generating the ill will when he repeatedly accused President Trump of inciting an insurrection on January 6. It appears Graham was unsuccessful.

President Trump also noted that McConnell cannot speak authoritatively on China, as he has strong familial ties to the communist country. McConnell’s family controls a shipping magnate that, while nominally based in the United States, exclusively sails with flags from foreign countries. Additionally, McConnell’s net worth dramatically increased alongside the fortunes of this shipping company.

McConnell is also willing to work to serve the Biden regime’s agenda. Recently, he confirmed that he will green light the Senate confirmation of Biden’s Attorney General nominee, Merrick Garland, who has sought to curtail the Second Amendment for over 20 years. 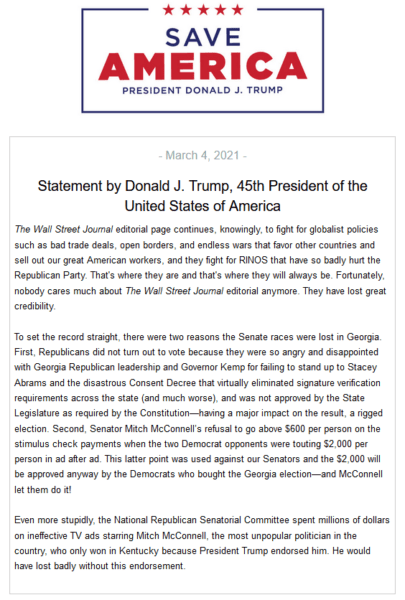