by Archive
in Big Tech

In one of the newly release documents, it is revealed that Google sees both those who question the scientific merits of climate change and holocaust deniers as “fringe queries” when searched on YouTube or Google.

On Wednesday, Project Veritas released a new trove of confidential Google documents, released through a whistle blower at the company who said he believes Google intends to ruin his life.

Among the more shocking revelations is the discovery that Google views Holocaust deniers and climate change skeptics in the same light.

The screen shot offers a number of items searched that should be considered fringe. Among these are “did the holocaust happen”, “sandy hook shooting is a false flag”, “vatican knows about aliens”, and “proof earth is flat”, all search items the majority of users would, indeed, consider fringe.

However, alongside them are perfectly reasonable questions that any curious mind may ask.

These include, “is global warming real”, “climate change hoax”, “who shot JFK”, and “do vaccines cause autism”. 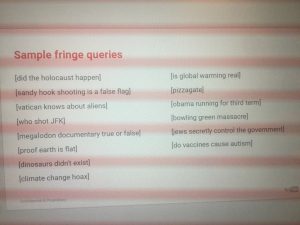 Essentially, if you have an inquiring mind and rebuke the leftist propaganda surrounding climate change and vaccines, or even if you do believe in the mainstream views on these issues but want to strengthen your arguments, you are considered a fringe part of society.

Project Veritas explains that this is only the tip of the iceberg for the most recent document dump:

Project Veritas has released hundreds of internal Google documents leaked by Vorhies. Among those documents is a file called “news black list site for google now.” The document, according to Vorhies, is a “black list,” which restricts certain websites from appearing on news feeds for an Android Google product. The list includes conservative and progressive websites, such as newsbusters.org and mediamatters.org. The document says that some sites are listed with or because of a “high user block rate.”

National File is currently reviewing the trove of documents and will continue to follow this story.