'Maxwell published this article, along with three other articles, to HuffPost’s now-defunct blog'

Ghislaine Maxwell’s HuffPost contributor page shows that she published four articles for the blog: “Tide Is Turning for Ocean Conservation” on June 19, 2014, “New Year, Old Challenges…For Climate Change” on January 4, 2015, “The New ‘Bait and Switch’ on Seafood” on April 1, 2015, and “When the Oceans Failed” on July 30, 2015. Maxwell was photographed alongside Huffington Post founder Arianna Huffington at a Time 100 gala.

Maxwell’s bio for the HuffPost website read: “Ghislaine Maxwell is founder and director of The TerraMar Project, an ocean conservation nonprofit. She holds a BA-MA from Oxford University, and is a helicopter and deep worker submersible pilot, and a certified EMT.”

Ghislaine Maxwell’s contributor page and her articles are now marked with notes posted on July 3, 2020 distancing the publication from Maxwell. The note on Maxwell’s HuffPost contributor page reads, “Editor’s Note: Maxwell published four articles to HuffPost’s now-defunct blog between 2014 and 2015. Maxwell, like all contributors to the blog platform, received no compensation for these articles, and she has no association or relationship with HuffPost. HuffPost is preserving these articles on the site as part of the public record.” 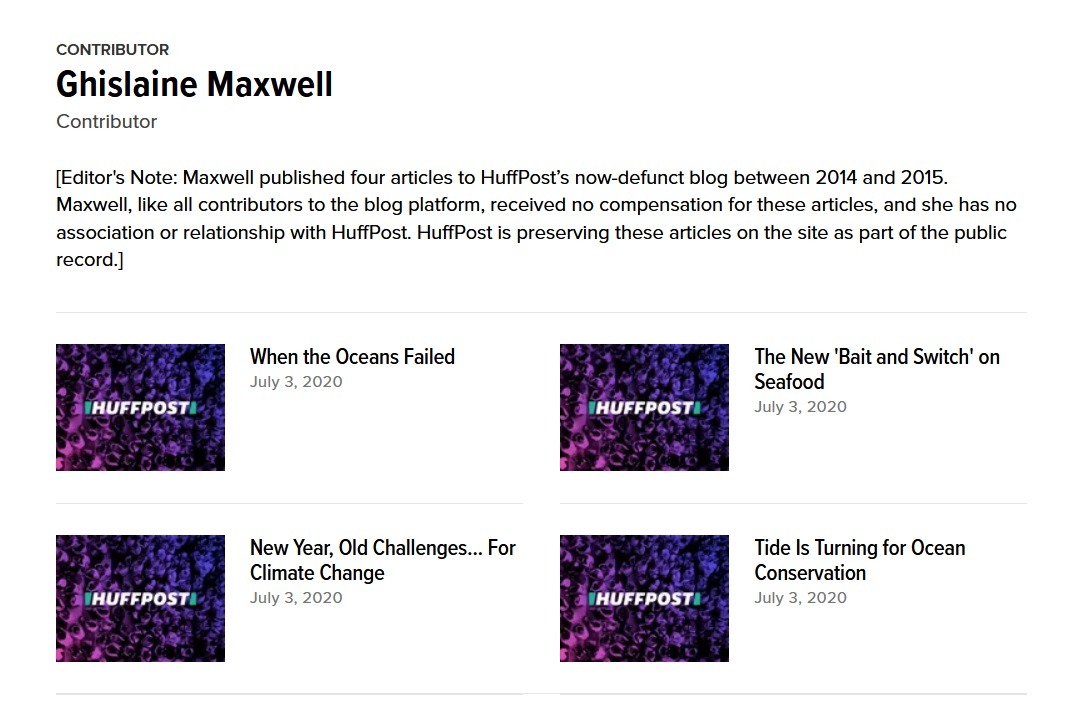 At least two of accused human trafficker Ghislaine Maxwell’s nephews worked in the Barack Obama administration, NATIONAL FILE has learned. One Maxwell nephew worked as a top official in Hillary Clinton’s State Department overseeing the Middle East while another nephew worked directly in the Obama-Biden White House as well as for the Clinton Foundation. Ghislaine Maxwell awaits trial on child sex trafficking and perjury charges stemming from her activities with her companion Jeffrey Epstein, the late pedophile.