Eric Lander, Joe Biden’s Science Advisor to the President and choice to head the White House Office of Science and Technology Policy, met with Jeffrey Epstein, the late pedophile and accused human trafficker. Epstein claimed that he funded geneticist Lander’s work, though a representative for Lander denies it. Photographic evidence shows very clearly that Lander had an immersive meeting with Epstein years after Epstein’s 2008 conviction for solicitation of prostitution with a minor. Archived documentation shows that Lander was listed as a funding recipient of the Jeffrey Epstein Foundation.

Lander met with Epstein and apparently had a vibrant discussion with him at Harvard in 2012. Here are the photos: 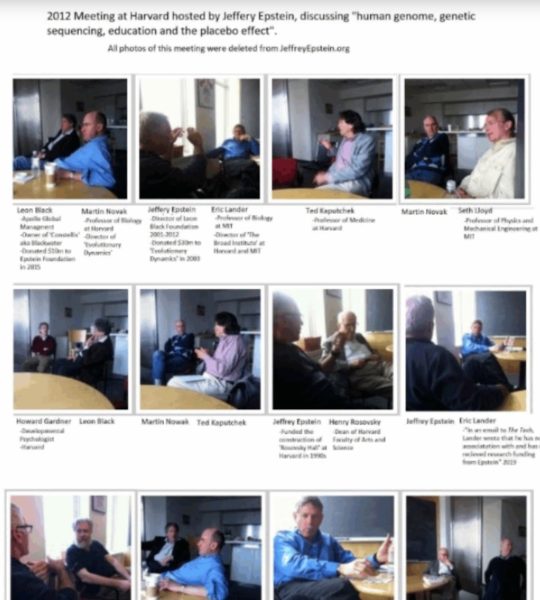 An archived record of jeffreyepsteinforum.com, the official website for the Jeffrey Epstein VI Foundation, shows that Epstein claimed to have funded Lander. The website states: “The Foundation has also had the privilege of sponsoring many prominent scientists including Gerald Edelman, Murray Gell-Mann, Eric Lander…” 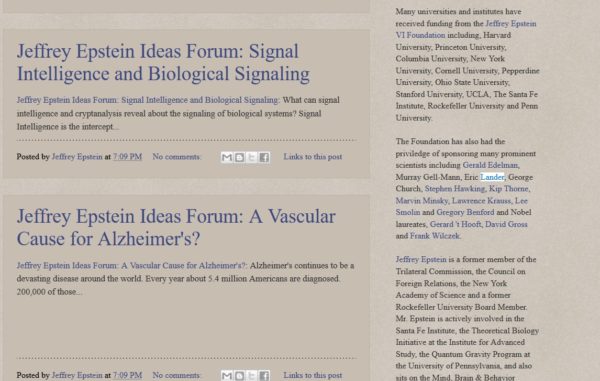 Lander and his representative have offered denials or excuses for these revelations. On the topic of his 2012 meeting with Epstein, Lander feigned ignorance, saying he went to the meeting based on an invitation from Epstein-funded Harvard scientist Martin Nowak and that “I later learned about his more sordid history. I’ve had no relationship with Epstein.” On the topic of the Epstein funding, a Lander representative said “Mr. Epstein appears to have made up lots of things and this seems to be among them.”

But Whitney Webb is not buying it. Webb, a journalist who has extensively covered the Epstein saga and his alleged connections to the Mossad and to world elites, wrote for The Last American Vagabond that: “Yet, there remains the issue that Epstein himself included Lander in a list of scientists he sponsored, with the other scientists on that list having indeed been supported by Epstein in some fashion. If we are to believe Lander, it remains unclear why Epstein, before he became so infamous, would falsely claim to fund Lander and why Lander would wait to deny any association until only after Epstein’s arrest. Given that the other scientists listed alongside Lander on Epstein’s website did receive funding from his foundation, it seems unlikely that Epstein would deceptively throw in Lander’s name among a list of several other scientists he was funding at a time, particularly when he was not yet publicly controversial and did not present such a grave risk to his associates’ reputations.”

As I reported for NATIONAL FILE: At least two of accused human trafficker Ghislaine Maxwell’s nephews worked in the Barack Obama administration, NATIONAL FILE has learned. One Maxwell nephew worked as a top official in Hillary Clinton’s State Department overseeing the Middle East while another nephew worked directly in the Obama-Biden White House as well as for the Clinton Foundation. Ghislaine Maxwell awaits trial on child sex trafficking and perjury charges stemming from her activities with her companion Jeffrey Epstein, the late pedophile.