by Kari Donovan
in News

Numerous Grand Old Party (GOP) “super donors” have gone public to denounce Ronna McDaniels for using her position as chairwoman of the RNC to finance her favorite campaign consultants.

McDaniels, the niece of US Senator ‘Mitt’ Romney, whose official duties as RNC chairwoman, according to the 2016 RNC party platform,  include being responsible for “developing and promoting the Republican brand and political platform as well as an election strategy.”

However, according to the donor’s public letter, McDaniels stands accused of ‘cherry picking’ her favored consultants in a sort of kickback scheme, and the resulting losses have placed the entire party “on the verge of permanent irrelevance,” the authors wrote.

The letter indicated that there was a lack of confidence in McDaniels as a leader to apply herself to try to win races for Republicans- indicating they believe that Republicans winning elections was not even in her considerations as the leader.

Citing the party’s disastrous last three elections cycles, the donors wrote in the letter that the party needs a change of leadership quickly to save their investment and to save the embattled grassroots activists who have complained about the direction of the party for years.

“The Republican Party currently faces the most organized, radical, and weaponized Democrat Party the nation has ever seen,” the donors wrote. “Despite this clear and present threat to our freedom, the highest levels of the Republican National Committee appear to be more focused on blaming others for their lack of leadership and lining the pockets of cherry-picked consultants than on winning elections.”

“We cannot continue on our current trajectory as a Republican Party,” the letter states. “We must change, in order to fulfill our promise to Republican voters to win elections.”

The significant donors who signed the letter include Dave Kelsey, Melinda Hildebrand, and Dr. James Reibel, among others, who had collectively contributed at least $14 million to the Republican Party since 2017.

Below is the letter: 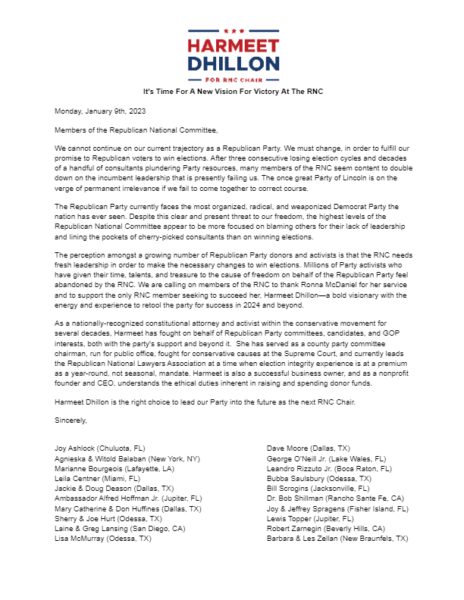 Dhillion appeared on Fox News with Maria Bartiromo right after she announced she was running to displace McDaniels.

Dhillon, citing many of McDaniel’s failures in leadership, talked about complaints of outdated technology that is used on Republican campaigns.

Dhillon said that as Chairwoman, McDaniels elevates failed consultants and that the party is spending too much time learning to tolerate too many losses for the GOP.

Dillion even went as far as to say that the party could ‘get addicted to losing’ if McDaniel is re-elected.

National file covered other votes of no confidence for McDaniels and reports of overspending:

Alabama GOP Has ‘No Confidence’ in Ronna Romney McDaniel, Calls for Her Removal as RNC Chair