by Cullen McCue
in Politics, The Hill

The Southern District of New York (SDNY) indictment against Sam Bankman-Fried, or “SBF,” accuses the disgraced FTX founder of violating federal election law. The 14-page indictment also alleges that Bankman-Fried conspired with others to violate federal election laws by making political donations to candidates and fundraising committees between 2020 and November 2022, in excess of federal legal limits and in the names of other people, CNN reported.

A top-ranking FTX executive last month flipped on Sam Bankman-Fried and his allies by tipping off Bahamian regulators about alleged malfeasance, the New York Post reported. That executive was Ryan Salame, who served as co-CEO of FTX Digital Markets prior to its collapse.

Bankman-Fried through FTX was one of this past cycle’s top donors and funneled tens-of-millions of dollars to both parties. FTX funds wired to the GOP were almost exclusively given to moderate/anti-Trump candidates and PACs, including sizable donations to both Kevin McCarthy’s Congressional Leadership Fund and Mitch McConnell’s Senate Leadership Fund.

In addition to those donations, FTX through Sam Bankman-Fried wired millions to dark money PACs that were used to attack pro-Trump/America First candidates. According to a Washington Post article from this past October, Kevin McCarthy operated a “secretive” anti-MAGA campaign within the GOP that in part used FTX funds to “systematically weed out GOP candidates who could either cause McCarthy trouble if he becomes House speaker or jeopardizes GOP [establishment] victories.”

“Most” of the money (millions of dollars), reported The Post, “came from none other than Ryan Salame. 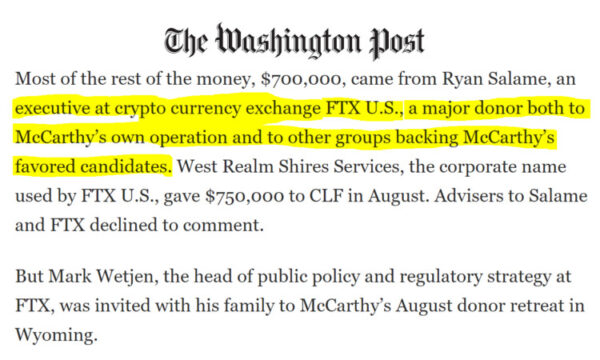 In Ohio, J.R. Majewski, who was in a heated battle against a 20-term Democrat, faced false allegations of stolen valor from the Associated Press, which appeared to be working hand-in-hand with the Democrat campaign to take down Majewski.

McCarthy used similar tactics against other candidates he didn’t like throughout the primary and general election seasons, including notables like Jarome Bell, Laura Loomer, Anthony Sabatini, Joe Kent, and Carl Paladino.

“Everything is happening behind the scenes, but obviously that is what the money shows,” Sabatini, who lost to a McCarthy candidate in Florida, said.

In addition to funding anti-MAGA efforts in GOP primaries, he also donated millions to Democrats and was instrumental in turning a newly created district blue in Oregon. In total, Sam Bankman-Fried donated over $27 million to Democrats in close House races.

But SBF has claimed that he donated just as much to Republicans through “dark money” donations this past cycle. The term “dark money” refers to political spending in which the funding source is not disclosed.

“I donated about the same amount to both parties this year,” SBF said in a leaked audio recording last month. He then went on to brag about how easy it is for big money donors to skirt the Citizens United ruling. “That is not generally known because, despite Citizens United being literally the highest profile Supreme Court case and the thing everyone talks about when they talk about campaign finance. For some reason, in practice, no one can possibly fathom the idea that someone in practice actually gave dark,” he said.

The FTX scandal could ultimately mean that over $73 million in political donations are at risk of being clawed back.