Sabatini, a rising America First firebrand, could have nearly $1 million in campaign attacks leveraged against him.

American Liberty Action PAC was formed at the end of July, and on August 5th, the FEC reported the PAC dropped $104,964 to work against Sabatini in his Florida District 7 campaign.

A similar pro-establishment, pop-up super PAC carried out a similar tactic in the Washington State Republican primary which was held earlier this week.

Conservatives for a Stronger America PAC took aim at Joe Kent, an America First candidate who faced up against his anti-Trump, pro-impeachment opponent, incumbent Republican Jamie Herrera Beutler in a tight primary race.

The Conservatives for a Stronger America PAC was created weeks before Kent’s primary, which he narrowly won on August 2nd. The fake Conservative PAC poured over $1.9 million into Kent’s district, attempting to brand him as a Leftist and disingenuous Republican.

“The goal is not to get Heidi [my opponent] across the finish line, it’s to take a little away from me. This is what people need to understand. … This is how the establishment wins,” Kent said in an interview.

Conservatives have speculated Sabatini will face increased PAC spending against him as his primary approaches on August 23.

“American Liberty Action PAC, registered at end of July 22 just dropped $104,964.00 against @AnthonySabatini in FL07 race. Looks like we might see a similar tactic that was used against @joekent16jan19, 2 weeks before his race,” a Kent campaign staffer posted on Twitter.

American Liberty Action PAC, registered at end of July 22 just dropped $104,964.00 against @AnthonySabatini in FL07 race. Looks like we might see a similar tactic that was used against @joekent16jan19, 2 weeks before his race https://t.co/UCMAZ2phps

Sabatini’s most competitive opponent is Cory Mills. Mills and Sabatini are neck and neck in a Florida Politics poll, sitting at 23% and 22%, respectively.

Sabatini’s road to victory will be an uphill battle with potential increased American Liberty Action PAC spending. Ad Impact reported the PAC has reserved over $360,000 in television and radio advertisements which will air August 9th-15th across Orlando.

OpenSecrets reports suggest over $800,000 will be spent by the PAC to hurt Sabatini’s chances. 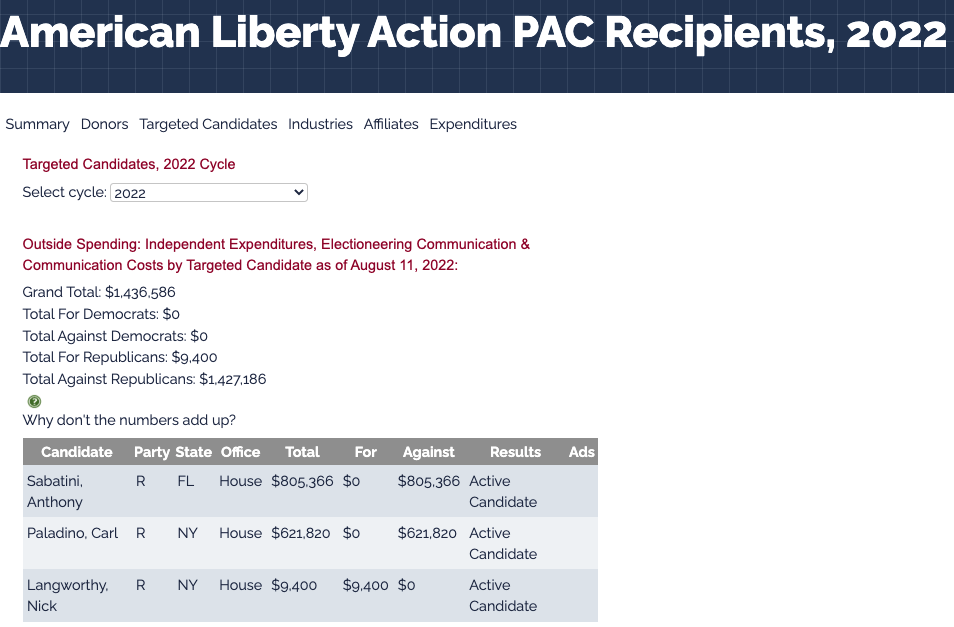