“The [Republican Party of Texas] will always fight censorship,” the party said in a statement. “We support the 1st Amendment, including free speech platforms.” They added, “TexasGOP has no plan to deplatform from any of our social media accounts. The 1st Amendment still shines brightly in the Lone Star State.”

The RPT will always fight censorship. We support the 1st Amendment, including free speech platforms & VC @CatParksTX's right to criticize such. TexasGOP has no plan to deplatform from any of our social media accounts. The 1st Amendment still shines brightly in the Lone Star State pic.twitter.com/mDsEb5hCYa

This comes after Greg Abbott claimed Gab was “anti-Semetic” and has “no place in Texas” while sitting in front of the American, Israeli, and Texas flags. Texas GOP Vice Chair, Cat Parks also came out against the first amendment and demanding the GOP delete it’s Gab Account in a public statement.

It should be noted that Cat Parks is known for working against Texas GOP Chairman Allen West and the grassroots activists in Texas. Most recently, her statement that the party should not focus on passing Republican priorities led some Republicans to wonder about her conservative bona fides. 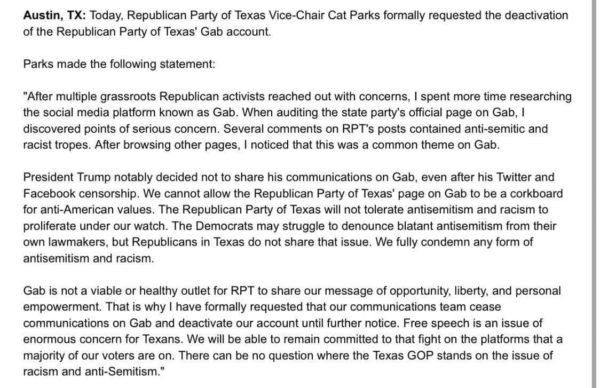 Cat Parks then doubled down on Twitter with a incredibly out of touch tweet where Gab then responded with the support from the Texas GOP.

Meanwhile, Abbot had said nothing about drag queen story hours in Austin and elsewhere in Texas, refusing to remark on whether grown men wearing dresses reading to young children as they sit on their laps are also “free speech” and “our values.”

Neither has Abbott commented on an employer telling people to “Try to be less White” or the anti-white material being spread at Texas public universities?

Abbott and Park’s Republican Party actively finances companies that openly dislike conservatives and censor them. Sometimes, in the case of Facebook, financing them to the tune of hundreds of millions of dollars.