Taylor Silverman, a female skateboarder who competed in the Red Bull Cornerstone event, called out the German company after a biologically male trans competitor won the event. Silverman finished in second place.

Silverman later shared her thoughts on the situation in an Instagram post hours after the event ended. The would-be champion posted a screenshot of an email she sent to Red Bull’s Senior Sports Marketing Manager Erich Dummer, who has yet to reply. 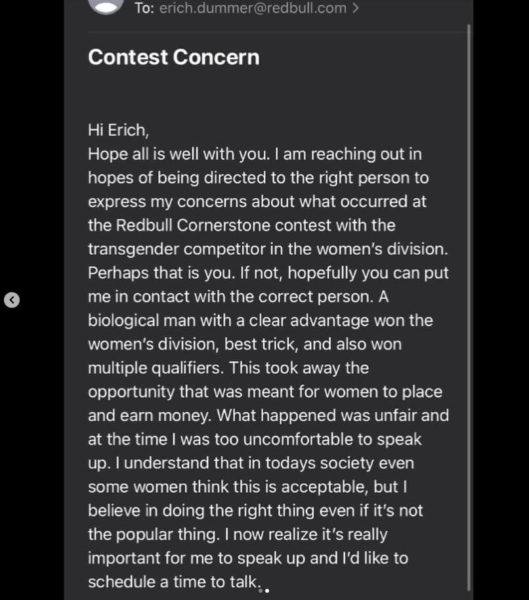 “I am a female athlete. I have been skateboarding for eleven years and competing for several years. I have been in three different contests with trans women, two of which I placed second,” Silverman wrote.

She pointed out that the trans skateboarder took home $1000 dollars in qualifiers, $3000 in finals, and $1000 in best trick. The biological male ultimately walked away with $5,000 worth of prize money that would have gone to female skateboarders.

“I deserve to place first, be acknowledged for my win, and get paid. I reached out to Redbull and was ignored. I am sick of being bullied into silence,” Silverman continued.

Female skateboarded Taylor Silverman is speaking out after placing 2nd to a male competitor who identifies as a woman at the @Redbull Cornerstone contest.

Silverman and other female skateboarders were robbed of their achievements and prize money "that was meant for women." pic.twitter.com/jVA48itMRa

The common theme was a total denial of basic biology, however, as the commenters universally ignored the physical advantages male competitors hold against females.

A small selection of the 1000's of hateful comments received by Taylor Silverman after speaking out against the title and awards she lost to the biological male she competed against in the @Redbull Cornerstone women's skateboarding competition. pic.twitter.com/Ugwf7KTjgL

In response to the trend of biological males competing in women’s sports, a number of states have enacted legislation to ban the practice. This includes Oklahoma, Florida, Arizona and Utah.

Democrats meanwhile have championed the “Equality Act”, which would amend the Civil Rights Act to prohibit “discrimination” on the basis of sex and a number of other categories. In short, the bill would prevent states from banning men from competition in women’s sports.