The Food And Drug Administration (FDA) approved an emergency use authorization for the Pfizer-BioNTech vaccine for children as young as 5 years old despite the fact that its Pfizer-connected advisory committee knew about numerous adverse events that were reported in Pfizer’s clinical trials for children, including adverse events that were determined to be “related” to the clinical vaccine trial. The Briefing Packet for the FDA advisory committee meeting shows that the FDA advisers used clinical studies sponsored by BioNTech and conducted by or supported by Pfizer to approve the vaccine for young children. Talk about a conflict of interest! NATIONAL FILE reported on the FDA advisory committee’s massive Pfizer connections and how committee members have worked for Pfizer and are making money from the Pfizer vaccine. So what kind of adverse events were discovered in the clinical trials for children? The advisory committee meeting briefing packet, published by the FDA, shows that clinical trials found “related” illnesses including Lymphadenopathy, arthralgia, paresthesia, nervous tic, hematochezia (characterized by bloody stool, which sent the participant to the “emergency department”) pyrexia (fever), neutropenia (low white blood cell count), hypersensitivity reaction, angioedema, and rashes. Meanwhile, a case of the blood vessel disorder Henoch-Schoenlein purpura was reported but was conveniently classified as “non related” to the vaccine experiment.

Here is the “Vaccines and Related Biological Products Advisory Committee Meeting October 26, 2021 Briefing Document” published by the FDA. Page 15 lists an “OVERVIEW OF CLINICAL STUDIES.” Two clinical studies are listed. The first clinical study listed is “Phase 1/2/3 Registrational Study C4591001,” which was sponsored by BioNTech and conducted by Pfizer. The other clinical study listed is “Phase 1/2/3 Pediatric Study C4591007,” which is listed as being sponsored by BioNTech and supported by Pfizer. “Pediatric Study c4591007” is an ongoing study and it was used by the FDA for approval of the vaccine for ages 5 to 12. That’s right. The FDA meeting’s data was taken from an ongoing study conducted by the very makers of the vaccine. The information below comes from the FDA Briefing Packet’s review of Pfizer Pediatric Study C4591007.

One participant had blood that passed through his/her anus, which is known as hematochezia, characterized by bloody stool. The document states that “One participant in the BNT162b2 group had a non-serious related AE reported by the investigator as moderate hematochezia 4 days after Dose 2. The participant had heme occult positive stool; was seen in the emergency department, and had no further tests done; and went home and the event resolved the same day without sequelae. This participant had a medical history of asthma and nondrug allergy and had no other reported AEs.”

On page 45, the document discusses a test subject that withdrew from the trial after developing severe pyrexia, which means severe fever, as well as severe neutropenia, which means a shortage of white blood cells, and bleeding gums. The document states that “One participant withdrew due to an AE of severe pyrexia with onset of 2 days after Dose 1 considered by the investigator as related to study intervention that resolved at 1 day after onset. Participant also had severe neutropenia (‘worsening from baseline’) with onset of 3 days after Dose 1 considered by the investigator as related to study intervention and reported as resolving at the time of the data cutoff date. Participant had a medical history of benign transient neutropenia of unknown etiology, gingivitis, and otitis media. Prior to study enrollment, she had a full hematology work-up (including for possible leukemia) with baseline absolute neutrophil count (ANC) of 480; the hematologist indicated no concerns with study participation. After Dose 1 Day 2 she reported a temperature of 40.1 °C. Her temperature returned to normal the next day. Two days after receiving Dose 1, the participant had a planned routine hematology appointment. The participant had an ANC of 20 and platelets were normal. No other symptoms or infections were reported at that time. Subsequently on Day 19 after Dose 1, the investigator was contacted by the participant’s caregiver who reported the participant had bleeding gums for 1 week prior. On Day 23, the participant attended Visit 2 to be seen by the investigator, was reported as doing well, and had a follow-up blood draw that showed the ANC had improved to 70. Dose 2 was not administered, and the participant was withdrawn from study intervention and remains in study follow-up. No other AEs were reported.”

The document states that “One participant without a reported medical history in the BNT162b2 had a related AE Type IV hypersensitivity reaction characterized by a rash on the forehead, earlobe, and right forearm 3 days after Dose 1. A dermatologist diagnosed the rash as a Type IV hypersensitivity reaction and characterized the rash as ‘plaque, erythematous and minimal crusting’, and prescribed Triamcinolone and Benadryl creams. No prohibited concomitant treatments or nonstudy vaccines had been administered. The event was reported as resolving 18 days after onset without sequelae. This participant had no other reported AEs. This participant received Dose 2 without any additional AEs reported post-dose.”

The document states that “One participant in the BNT162b2 group had a related AE of moderate angioedema reported as ‘perioral and periorbital angioedema due to allergic reaction’ and concurrent urticaria reported as ‘hives of the face and back caused due to allergic reaction’, both with onset of 2 days after Dose 2, and was reported as resolved 2 days after onset. Participant’s medical history included past allergy (hypersensitivity with mild rash) to a vaccine, Sever’s disease, contact dermatitis and seasonal allergies. This participant received no prohibited concomitant treatments or nonstudy vaccines. An analysis of angioedema cases reported in the BNT162b2 group included angioedema (see above) and urticaria (n=3). Two of the cases of urticaria were considered by the investigator as related to study intervention; one is described above (concurrent with angioedema).”

The document states that “Rashes were reported in 6 participants in the BNT162b2 group. Rashes considered as related to BNT162b2 were all mild or moderate included: rash maculo-papular, rash macular, rash papular and rash (n=1 each). Rash is considered an adverse reaction of the vaccine and is noted as such in the EUA Fact Sheet.” 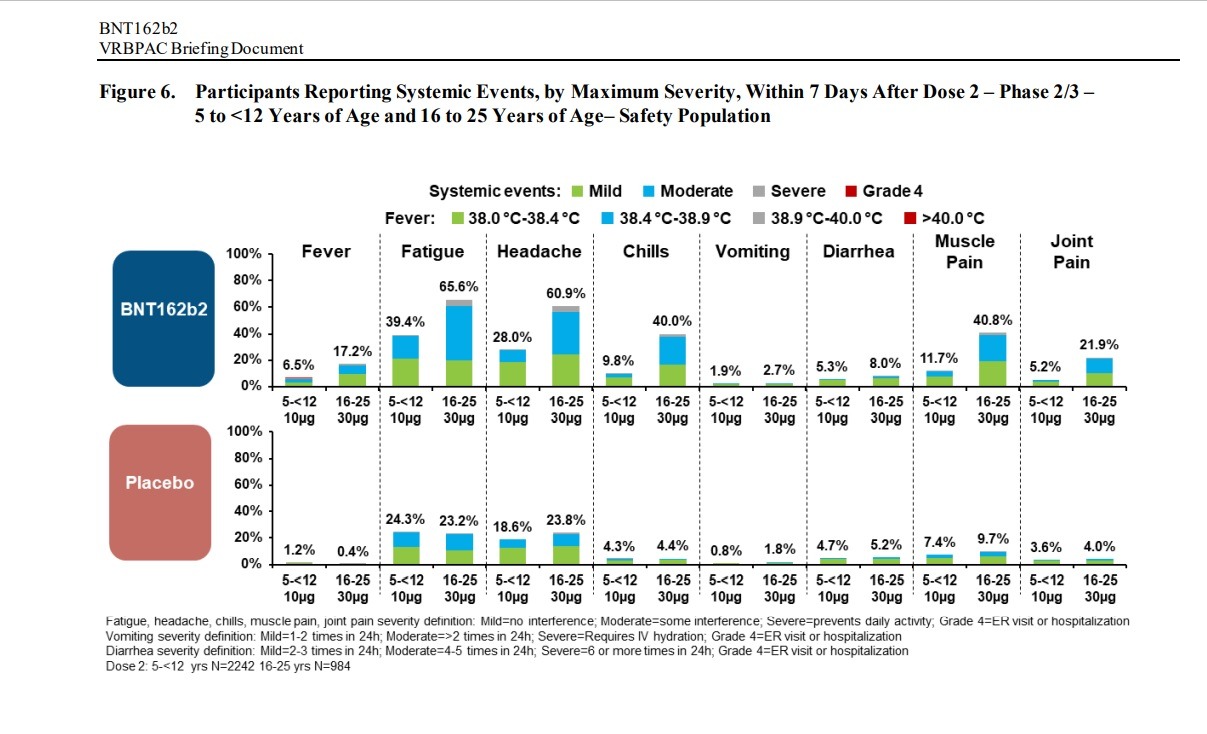 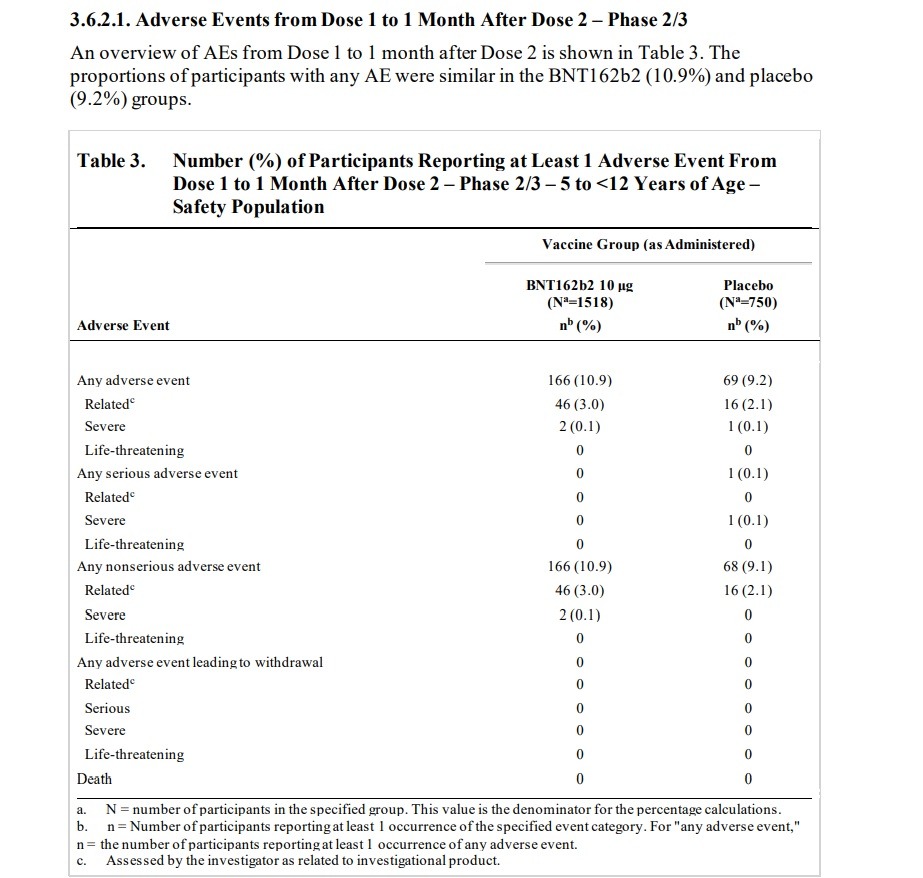 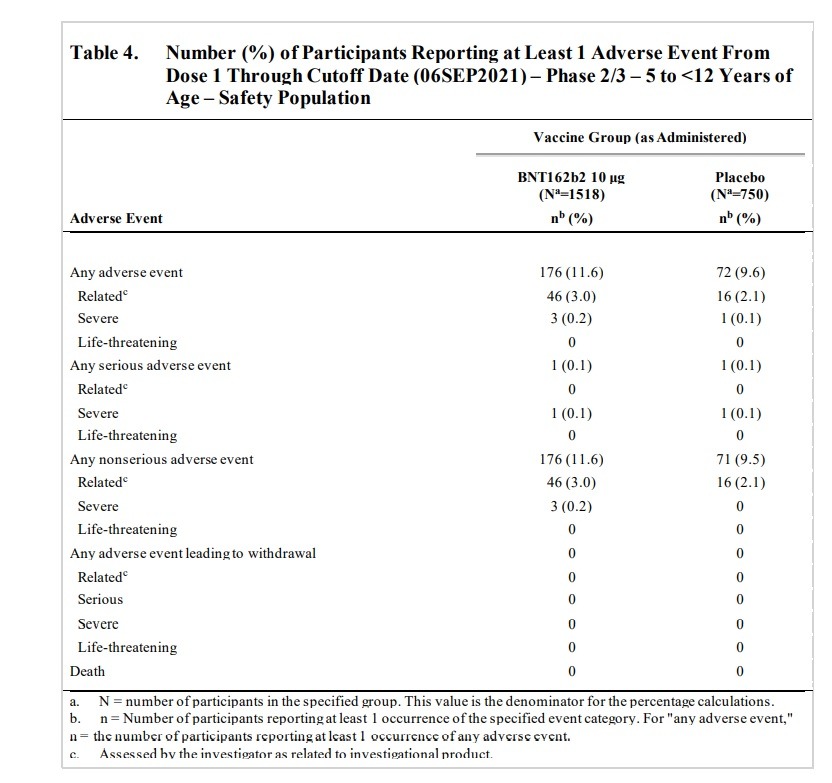 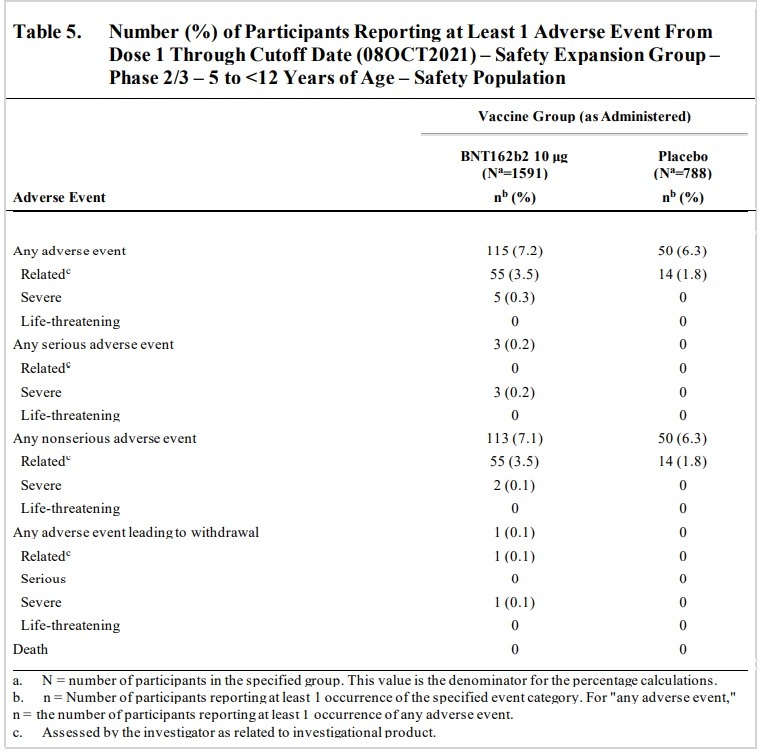