Fake news is spreading across social media, attempting to justify the execution-style murder of a five-year-old.

A doctored screenshot of a falsified press release from Wilson Police Department has enjoyed relative popularity as leftists and Black Lives Matter supporters scramble to salvage the prevailing mainstream narrative that lit the metaphorical tinder box causing the riots across major U.S. cities to take place in late-May and early-June.

Darrius Sessoms, 25, is alleged to have shot five-year-old Cannon Hinnant in the head at point black range for accidentally riding his bike on his front yard. The story grabbed international headlines as the alternative media drove coverage on the internet.

However, despite the allegations, some social media users conjured up a falsified press release of the crime, using the Wilson Police Department’s social media logo to imitate authenticity. The fake release contains a few spelling mistakes and grammatical errors–initially raising suspicions surrounding its legitimacy.

“Just to be clear, we did NOT find any evidence to back the version of events the family has been claiming,” the fake release read. “The parents of Cannon claimed their son had been shot at random for riding his bike into the neighbor’s yard. This is not an accurate [sic].”

It continues: “The version of events the suspect gave the police after his arrest was that Cannon’s father had invited him over over [sic] earlier in the day to do drugs.

“They later got into an altercation after getting high. Darrius claims that he struck Cannon by accident via a stray bullet while aiming for the child’s father, Austin Hinnant.

“Preliminary evidence has so far lined up with the suspects [sic] version of events. Both of the parents have prior histories of drug use and offenses.”

The creative–but error-laden–retelling of events was shared multiple times in an effort to sway the narrative away from the alternative media.

In spite of the post’s multiple errors, dozens of social media users bought the falsification.

“While Cannon’s father did admit he invited Darrius over during the day, he has refused to tell ocal authorities what exactly they were doing in the home prior to the incident.” the post explains. “When our officers arrives in [sic] the scene, Austin Hinnant appeared to be unde [sic] the influence of prohibited substances but refused to cooperate with our officers.”

“We, as of today, have not discovered any evidence of this incident of [sic] being pre-meditated [sic] or committed with any intent to kill the child,” the fake post adds.

Before the post is cut off, it reads: “However, as with any violent crimes committed against children, Cannon’s parents Austin Hinnant and Bonny Waddell have been placed under formal investigation under order of the Attorney General Josh Stein.” 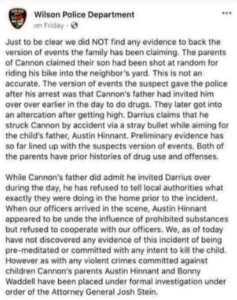 Following the revelation of the fake release, The Wilson Police Department issued a statement on Facebook to address the circulation of doctored releases purporting to be from their social media account.

The Wilson Police Department wrote: “The Wilson Police Department has been made aware of numerous posts containing false information circulating on social media, including some posts that look like they were releases from investigators. These are fraudulent posts. You can help us by reporting these fraudulent releases to Facebook so they can be removed.”