A Facebook group with 20,000 members who support the alleged killer of 5-year-old Cannon Hinnant is going viral both due to its size and the controversial opinions held by group members.

Darius Sessoms, 25, is alleged to have murdered Cannon Hinnant, 5, after shooting him in the head at point blank range when Hinnant rode his bike on Sessoms’ front yard. The incident became an international story as alternative media led the charge, while some mainstream media outlets completely sidestepped a brutal alleged murder that fails to fit their narrative.

The group’s opening statement read: “Darius Sessoms has been accused of a heinous act that he didn’t commit. This is all propaganda from the far-right Trump propaganda machine to make black people look bad.

“We cannot sit idly by while our president plays fast and loose with the laws. That’s why we need to back Darius against these outrageous allegations.”

One internet sleuth managed to infiltrate the group–that was reportedly started as a troll, but attracted various Black Lives Matter supporters–and nab screenshots of member’s posts.

“Has a Go Fund Me been set up for Darius? He’s a political prisoner and I would like to donate. We can’t sit idly by and let the system persecute him unjustly,” one person remarked.

Another person commented on the crowdfunding total the Hinnant family was set to receive. They wrote: “Not surprised the parents are cashing in… we’re going to find out later that he was provoked or somehow set up. Good luck getting that refund.”

Others commented on how Hinnant’s murderer was arrested and justice would be obtained. Meanwhile, George Floyd’s death was not believed to receive the same level of justice–bringing the conversation back to the topic of systemic racism.

“I’d feel worse about his death if he didn’t have such a stupid name. A “cannon” that gets shot? Seems like his dad was asking for it since day one,” responded one Facebook user.

The group has a simple membership process in order to join. 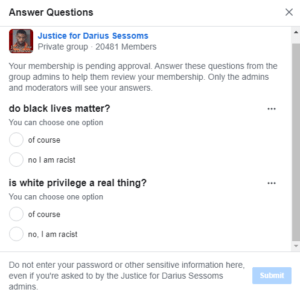 In addition to the “Justice for Darius Sessoms” group, a fake Wilson Police Department press release circulated social media to spread disinformation and to steer the narrative away from Hinnant’s murder.

The falsified Wilson PD Facebook post was fraught with typos, spelling mistakes, and grammatical errors leading many to immediately question its authenticity.

However, the fake release managed to convince dozens of a change in narrative surrounding the horrific crime.