Packages are being sent to the United States from Wuhan, China despite the deadly Coronavirus causing the city to be quarantined.

Documents provided to National File show the United States Postal Service processing packages sent from Wuhan, China, despite the deadly Coronavirus originating in the city, and despite a Chinese quarantine.

USPS tracking information was sent to National File showing a package originating in Wuhan, China being sent to an American citizen in North Carolina.

Our source, the recipient of the package, provided audio of calls to the United States Postal Service, the U.S. Customs and Border Protection, and the Center for Disease Control asking about the potential viral safety hazards of receiving mail from the city at the epicenter of the Coronavirus outbreak.

None of the organizations had a ready answer about why our source is able to receive mail from a quarantined city.

“I literally am being sent a package from Wuhan, China in the middle of an outbreak,” the source told National File. “I called the CDC and USPS and emailed the State Department.”

Our source continued, “Even if the possibility of getting corona from a package is very low, there are vast numbers of packages coming in, and all it takes is one. The risk could be zero  just from shutting it down.” 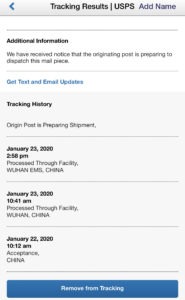 National File’s source says, and the audio of the phone calls seem to confirm, that no governmental body contacted had a ready answer for the safety or thought process behind allowing mail from the quarantined city.

“Neither the CDC or USPS were prepared to even address this,” said our source. “The folks I talked to were shocked when they thought about it.”

In our source’s audio recording of a phone call to the USPS, the customer service representative first seemed confused about the point of the call.

After explaining his reason for calling, the person working at the USPS reacted with surprise, and admitted that she had never considered the potential hazards of receiving mail from a quarantined city.

“That is so correct sir, and I never thought about it until you brought it up,” said the USPS employee. She then asked, “Do you think it’s going to be transmitted through a package?”

National File’s source, a chemist with a small laboratory at his disposal, then explained to the USPS employee that it is possible depending on the contents of the package.

National File’s source also contacted U.S. Customs and Border Protection, and our source says they were “basically blown off” by the organization.

After explaining his reason for contacting the CBP, the employee responds, “Okay. Woah.”

“Okay, yeah, they about shut down the whole, like five or 10 cities out there,” she continued after briefly researching Coronavirus.

READ MORE: Chinese Say ‘No Masks! We Trust the Government!’ in Guangzhou

“How is it being sent to you?”

National File’s explained that he is being sent the package via USPS, and that it is to replace an item the source previously ordered on eBay.

He reiterated his concern that the USPS had no ready answer about whether it is concerned about mail sent from Wuhan, China.

“They’re going to be the first point of contact when [the package] arrives in the U.S.,” she confirmed.

“You have to deal with the mail service,” said the CBP employee. “If you have a tracking number then you can reach out, and you said you did.”

“It’s all over the news and everything,” the CBP employee added. “I would just keep in contact with [the USPS] and the CDC.”

“So you’re concerned about receiving a package from Wuhan, China,” said the CDC worker, before placing National File’s source on hold.

After several minutes of holding, the CDC worker resumed the phone call, and seemingly began reading a statement:

Thank you for holding, caller. On January 9 2020 the WHO reported that a new Coronavirus in people was preliminarily identified by Chinese health authorities as part of the investigation into an outbreak causing pneumonia in Wuhan China a number of countries including the US are actively screening incoming travelers from Wuhan and reported cases have been confirmed in Thailand, Japan, the Republic of Korea and Taiwan. The united states announced the first infection with 2019 NCOV detected in a traveler returning from Wuhan. Coronaviruses are a large family of viruses, some causing illness in people, and others that calculate [sic], that circulate among animals including camels, cats, and bats. Rarely, animal Coronaviruses can evolve and infect people and then spread between people.

Our source interrupted the apparently prepared statement, and again asked why the mail was able to be sent from the virus’s epicenter.

“I definitely understand what you’re saying sir, I can only provide you with this general guidance.”

He then attempted to begin reading from the statement again. Our source interrupted by asking if there is someone else he could speak to about why the mail is allowed to be sent.

“I can definitely escalate your inquiry and the CDC will reply to you,” said the CDC worker.

The CDC worker then asked for our source’s full name and contact information to provide to his superiors.

National File contacted USPS for comment on mail coming into the United States from Wuhan, China, and did not receive an immediate response. National File will provide updates when our source visits his local post office in person or if we receive information from USPS.