In an exclusive interview with National File, Paul Miller explains that he was questioned by the FBI after attending several anti-lockdown protests in New Jersey, and suggesting an open carry protest on Facebook.

Miller was allegedly reported to the FBI by a disgruntled Facebook user when Miller suggested “If we want the police to stop harassing us we need to have armed protests.” 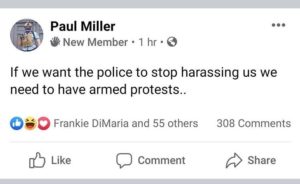 After attending several open carry rallies in Virginia and Minnesota, Miller reflected on issues protestors were encountering during their rallies, and suggested a way to fix that was to follow the examples set by those who peacefully demonstrated in Virginia and Michigan.

“Where it really came to a head is when the Atilis Gym thing happened. When we started to protest at Atilis, and then they were arresting the people leaving the gym, they gave tickets to the owners, and then on top of that they had some kind of other with the plumbing after Murphy went on a press conference and said he was gonna shut them down.”

Following his on the ground reporting at Atilis Gym, Miller took notice of the aggression displayed toward citizens who engaged in civil protest. A day after the crowd clapped and thanked officers for allowing them to attend their own gym, for which they had paid memberships, New Jersey police arrested a fitness enthusiast for refusing to give his name to a contact tracing officer.

Miller remarked that the crowds in New Jersey were in shock by the treatment from the local police. “What do we have a time limit on our first Amendment rights? We can stand out here all day if we want.”

The man who was arrested for refusing to identify himself was exercising in a mask and respecting social distancing, but the police did not seem to take this into consideration. Following this incident, Miller made the comment a Reopen America Facebook group.

When Miller expressed an interest in an act of civil disobedience in line with recent open carry rallies in Virginia and Michigan, he was surprised to find active and aggressive resistance and negative comments from within the private Reopen America page from ‘a few veterans’ and people who appear to be with law enforcement.

While Miller admits he was angry at these people, he maintains he made no threatening remarks. The same can not me said for all the commentators, one of who actually made a death threat. 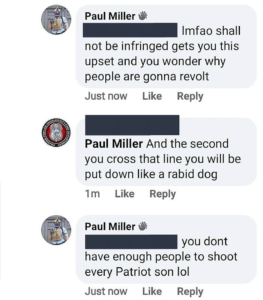 After the FBI came to his family home, Miller called the Agent over the phone. The Agent explained someone had called the FBI tip line to inform them of Millers intentions to bring guns to a NJ reopen America rally.

“Now on paper, that looks pretty bad,” Says Miller. Without the context of the previous rallies in Michigan and Virginia, that comment can be easily misconstrued.

Although there is no distinction between and open carry permit and a conceal carry permit in New Jersey, the requirements and fees are so extensive that having a permit in the state is rare. Miller points out that this is the purpose of civil disobedience.

Miller believes that if there were a rally similar to Michigan or Virginia that the state government would have to start taking the rights of local citizens more seriously, including free speech and the right to bare arms.

“Nobody wants violence. Nobody wants this [rally] to get out of hand, but what are we supposed to do when you have the police arresting moms and they’re arresting people going to the park, their arresting protestors, there throwing people to the ground, giving them fines, and putting surveillance cameras outside their businesses,” Miller says. “How much are we suppose to take?”

Miller told National File that the FBI Agent explained how the idea of an armed protest in New Jersey would be a scary idea to some people.

“I said well you know something that may be true, but you know what else is scaring people? Seeing moms getting arresting taking their kids to the park, seeing protestors get arrested, seeing people get arrested for going to work. That is scaring people really bad. So before this gets any worse, I think this should be done-I told him[FBI Agent] straight out so that maybe the government will understand that the people have had enough.

When the FBI assessed that Miller was not a threat, he was quickly rushed off the phone.

National File contacted the FBI agent who spoke with Miller, and as of the time of publication, we have not received a statement from the FBI.

“If you’re out there listening, and you are maybe afraid and you are feeling unsure and you are not sure if you should defend the Second Amendment. What should we do? It’s so difficult but my advice to you basically is you have to think of the founders. As silly as it sounds you have to think back to those people. Think of those people, what they did on horseback with plagues fighting a revolution without a damn country, no constitution, no laws, they got nothing! Yet, they found a way because when you’re with God and you believe and you are righteous and your cause is righteous God helps you and you find a way,” Miller says

“If they can handle all that, than we can do this.”