Mayor Dale Holness in Broward County, Florida Mayor Brandon Whipple in Wichita, Kansas were both caught by citizen journalists violating their own orders for citizens to wear masks while in public or in circumstances where social distancing may not be possible.

Citizen journalists are exposing their mayors violating their own orders requiring masks to be worn in public or in any situation where strict social distancing guidelines can be observed, with video emerging of Holness at a popular restaurant enjoying a social gathering that is both without masks and above the maximum number of people allowed to mingle together, and a photo of Whipple taking a selfie with a man, who is wearing a mask, without wearing one himself.

Multiple sources in Wichita sent this photo to National File, appearing to show Whipple violating his own order only days after enacting it. According to his mask ordinance, if guilty, Whipple could be fined up to $25 for his first offense, $50 for his second, and $100 on his third offense or any future times he is caught not wearing a mask. 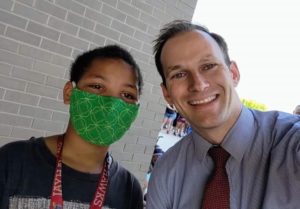 Since the photo has surfaced, Whipple has threatened to revoke the liquor licenses of any bars that do not enforce mask wearing and social distancing, and the county in which Wichita sits ultimately decreed that bars must be closed within its limits.

Around the same time, citizen journalists in Broward County, Florida say they confronted Holness at a popular restaurant within hours of his mask order, where they recorded video of the mayor dining in the company of well over 10 people, some who appeared to not be wearing masks. If guilty, Holness could face a $500 fine, or up to 180 days in jail, as could the business owners who allowed this to take place in their establishment.

National File has extensively covered the COVID-19 response in Broward County, which has been one of the most extreme in the nations. Currently, residents of Broward County are expected to wear masks and social distance in their homes, and will be in violation of the order if they do not.

National File’s Patrick Howley recently spoke to Chris Nelson, one citizen journalist in the area who confronted Holness for not abiding by his own ordinance while at a restaurant.

“The very next day the guy is gathering with, I counted, 18 people up there,” said Nelson. “According to his rule, I could have called the Broward County snitch line and reported him, and reported that business.”

“The owners of the business and the people there, this is a very Caribbean area,” he added, “They were asking us a lot of questions” about COVID-19 and the recent revelations in Florida that labs were publishing fraudulent COVID-19, and a state official recently claimed a man who died in a motorcycle accident actually died of COVID-19.