We only know the cause of death for Ashli Babbitt, who was shot by a police officer. The rest are still a mystery.

The Office of Chief Medical Examiner of the District of Columbia answered this writer’s inquiry saying that the Washington, D.C. coroner’s office has not yet determined the causes of death of any of those who died during or around the protests.

On January 13, Democrats and 10 Republicans voted on the floor of the U.S. House of Representatives to impeach President Donald Trump. The debate in favor of impeachment was heavily punctuated with claims that five people died on January 6, 2020, sometimes said to be six people, as a result of the demonstrations planned starting in mid-December 2020. Therefore, they argued, Trump’s First Amendment protected speech caused five or six people to die.

But the question still remains unanswered: Other than the police shooting of Ashli Babbitt, were the other deaths caused directly by the protest?

National File’s reporting has already suggested this may not be the case. Patrick Howley once again broke national news here with indications that the police officer died of unrelated medical conditions and not as a result of the protests.

On January 13, National File asked the media relations offices for precise details about those deaths. This was while the debate for impeachment of Donald Trump was unfolding on Capitol Hill.

The coroner’s media relations office answered very quickly on the same day, claiming that “The Office of the Chief Medical Examiner will only release the cause and manner of death when this information is available.”

To a follow-up question, OCME’s press office clarified on January 13, when asked if this meant that “available” mean that no cause of death had been determined or that the cause of death was simply not being released publicly:

“OCME medical examiners comply with the National Association of Medical Examiners’ (NAME) standard to determine the cause and manner of death within 90 days; however, for cases that are more complex it could be longer. “

Separately, the Metro D.C.’s press office also declined to provide any information on the causes of death, saying “Please direct your questions to the Office of the Chief Medical Examiner as they conducted the autopsies.”

The D.C. Police references “autopsies.” It is unclear if they meant the the dictionary definition of the term, but National File has learned that decedents do not generally receive full-blown autopsies. Generally, a cursory examination would be enough to categorize why someone died, especially if it was a result of mob violence.

Officially, on the record, we still do not know why or how anyone but Ashli Babbit died. Yet, decisions are being made on a national level based on the belief that five or six people died because of the protest. It is possible that no one died “because of” the protests other than Ashli Babbitt, who died after a police officer shot her in the neck. 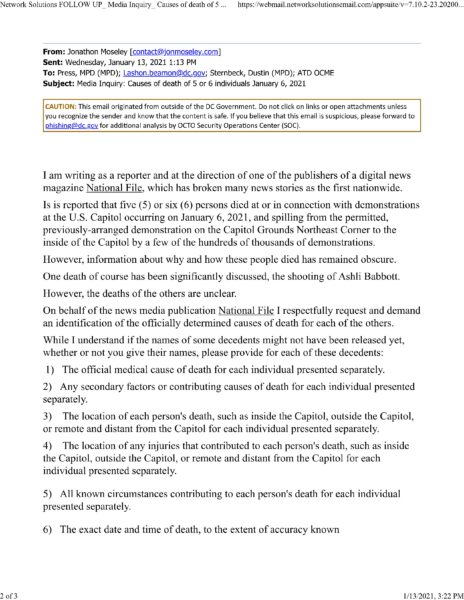 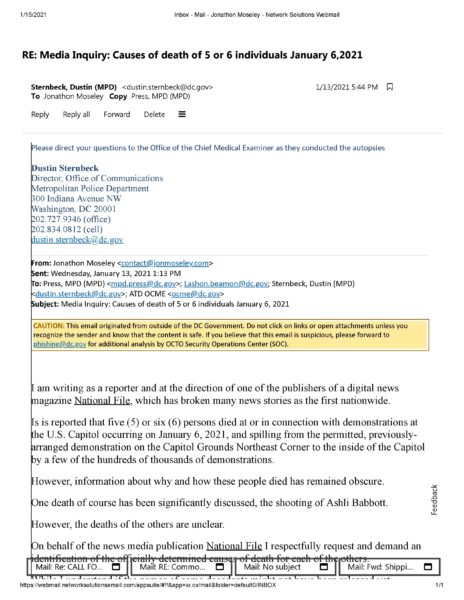 We know Ashli Babbitt, who was unarmed, was shot in the neck through a window even though two uniformed police in riot gear and carrying AR-15s were right behind her.

National File was instrumental in breaking the news about who the shooting victim was and how Ashli Babbitt had been shot by a plain-clothed police officer. National File was first to publish actual video of the shooting, which revealed among other things that two Metro D.C. police dressed in uniformed full riot gear and helmets and carrying AR-15s were only a few feet behind Ashli Babbit when the plain clothed police officer shot Babbitt, who was clearly unarmed, in the front. If there were any threat, the two police officers right behind her would mitigate any such threat.

It stands to reason that, more than a week after their deaths, the officers involved, their families, and the medical examiner have at least an educated guess for the causes. However, no cause of death has been released and it may be 90 days before the D.C. government will provide an official answer as to why anyone died.

Similar misinformation spread quickly in the past, and was exploited for political aims.

At the competing protests in Charlottesville, Virginia that occurred in 2017, a law enforcement helicopter crashed due to mechanical failure. The media repeatedly to include the tragic deaths from a downed helicopter – nowhere near the actual protests – in the count of injuries from the clash of different groups that day.

Now, decisions at the highest level of our nation are being made based on the premise that five or maybe six people died because of the January 6, 2021, demonstrations, meaning the U.S. Congress is making decisions when the Coroner has not yet even determined or released an explanation for why these people died.