The Columbus Police Officer who shot and killed 16-year-old Ma’Khia Bryant has been cleared of any criminal wrongdoing, prosecutors said Friday. Bryant was armed with a knife when she was shot and was seconds away from stabbing another girl when the shooting took place last April. The entire incident was captured by Reardon’s body camera while additional angles were filmed by bystanders.

Bryant was killed when officers responded to a 911 made from Bryant’s foster home about a group of girls threatening to stab members of the household. When officers arrived, Bryant swung a knife at another girl and had already pushed another to the ground. Bryant was shot four times and died at the scene.

The Bryant shooting led to a Justice Department review of the city’s police department. In announcing the grand jury decision, special prosecutors Tim Merkle and Gary Shroyer noted, “Under Ohio law the use of deadly force by a police officer is justified when there exists an immediate or imminent threat of death or serious bodily injury to the officer or another.” They said the decision followed a full review of the shooting.

Reardon stated that there was no time to use non-lethal tools such as mace or a taser because Bryant was already swinging the knife at another young woman. “At the time I fired my weapon, I was in fear for the life of the female in pink,” Reardon said. The city will now conduct an internal review to determine whether Reardon’s actions followed department policy, the Columbus Public Safety Department wrote in a tweet.

A week after Bryant’s death, Columbus Mayor Andrew Ginther asked the Justice Department to review the police department for possible “deficiencies and racial disparities.” The Justice Department accepted and agreed to review the department’s practices. The DOJ said that it’s Office of Community Oriented Policing Services would conduct a review of what the department called technical assistance in such areas as training, recruitment including a focus on diversity and creating an early intervention system for officers.

The Ma’Khia Bryant shooting was portrayed as an instance of an unjustified police killing by leftist activists, pundits and media outlets. NBA superstar Lebron James infamously tweeted a picture of Reardon captioned “YOU’RE NEXT”, which he later deleted after backlash. Black Lives Matter organizer Bree Newsome downplayed the fact that Bryant was armed with a knife, saying that “teenagers have been having fights involving knives for eons.”

The White House also weighed in on the shooting just after it happened last April. Psaki told reporters that Bryant “was a child” and that the administration’s focus “is on working to address systemic racism & implicit bias head on.” 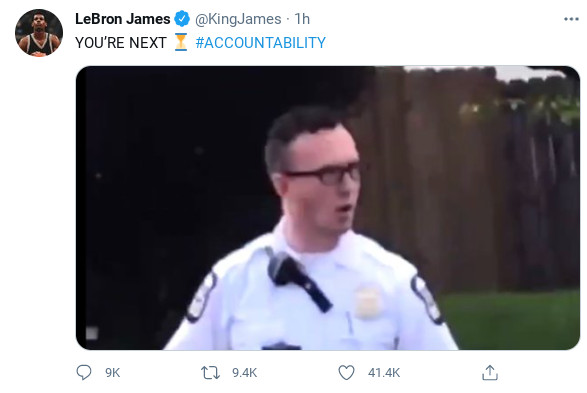 Psaki was asked about the Columbus police shooting of Ma'kiyah Bryant, a teen killed while trying to stab another girl with a knife.

Psaki said Biden has been briefed on it, adding, "She was a child… Our focus is on working to address systemic racism & implicit bias head on." pic.twitter.com/E0xdeZUvJv