The NBA billionaire was quick to delete the tweet after the bodycam footage was released.

NBA player LeBron James threatened the Columbus police officer involved in the shooting of the knife attacker teen, Ma’Khia Bryant, in a post on Twitter. After the full bodycam video was released showing that the officer had actually saved a black life, James quickly deleted the tweet.

In the now deleted post, James put the officer’s picture up for the world to see with the caption “YOU’RE NEXT” in all caps next to an hourglass emoji with the hashtag “#ACCOUNTABILITY”. 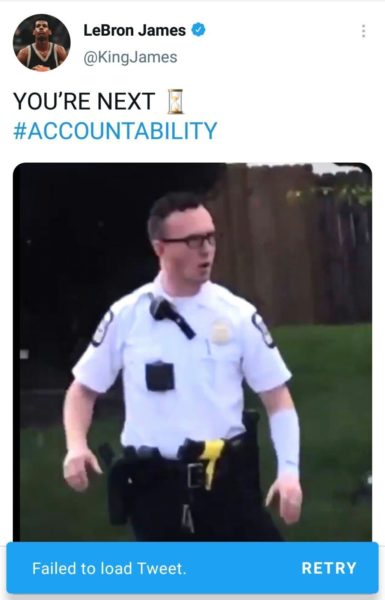 James finds himself on the list of Americans who expressed outrage over the Ohio shooting incident before learning the facts of the matter. It appears that James aimed to capitalize on the ongoing racial tensions in the United States that have been rattled in lieu of the Derek Chauvin verdict that was reached by a Minnesota jury yesterday, in which jurors had found the police officer guilty on all counts for the murder of George Floyd. However, in the case of the officer-involved shooting in Columbus, in the Mayor’s own words, “it is clear the officer took action to protect another young life.”

LeBron James, like other elites, is using racial division as a distraction as elites reshape America to be more like communist China. Elites prefer communism. Millionaire elites are protected by communism. They're the "Talented Tenth" W.E.B. Du Bois promoted. You're being played.

The full body cam video of the officer involved shooting of Columbus teen Ma’Khia Bryant on Tuesday afternoon was released during a press conference held by the Columbus Department of Public Safety. The video shows the young teen charging an individual with a knife before being shot by police, as National File reported.

“About 6 minutes and 40 seconds into the video posted to YouTube, viewers can see that Bryant was wielding what appears to be a knife as she charges another individual. Right before Bryant appeared to be in the process of stabbing the individual, she was fatally shot by police. The knife apparently held by Bryant can be seen on the ground repeatedly after the shooting.”

This would not be the first time James, a so-called “champion of social justice,” has found himself on the wrong end of an issue regarding social justice. He has long been criticized for being silent on China’s human rights abuses in what was described as “an embarrassment to himself and NBA.”

“Oh, my. It’s hard to fathom where James’ was coming from on this. Perhaps he hasn’t followed the protests in Hong Kong for the past five months, where millions have taken to the streets in opposition to growing authoritarian concerns coming from mainland China. He may take notice now, with protestors burning his jersey in the streets Tuesday.”

Despite the Ohio situation appearing to have nothing to do with “systematic” or “systemic” racism, an angry mob of Black Lives Matter supporters swarmed police and screamed profanity outside of the police headquarters in Columbus. The Biden administration also weighed in on the Columbus incident, attempting to tie it in to their notion of widespread systemic racism in the United States.

Psaki was asked about the Columbus police shooting of Ma'kiyah Bryant, a teen killed while trying to stab another girl with a knife.

Psaki said Biden has been briefed on it, adding, "She was a child… Our focus is on working to address systemic racism & implicit bias head on." pic.twitter.com/E0xdeZUvJv

The Utah Jazz defeated the Los Angeles Lakers on Monday night 111-97 without James, who is reportedly dealing with a high right ankle sprain.