BREAKING: Trump Retweets #PenceCard Memo As Pence Only Has 4 Hours Left To Follow The Law

BREAKING: Trump Retweets #PenceCard Memo As Pence Only Has 4 Hours Left To Follow The Law

President Trump has retweeted the #PenceCard memo that details how the Vice President has the ability and duty to reject Electors by Wednesday 23rd.

President Trump has retweeted the #PenceCard memo that National File obtained earlier this week, based on an argument from lawyer Ivan Raiklin, an expert on the Constitution. 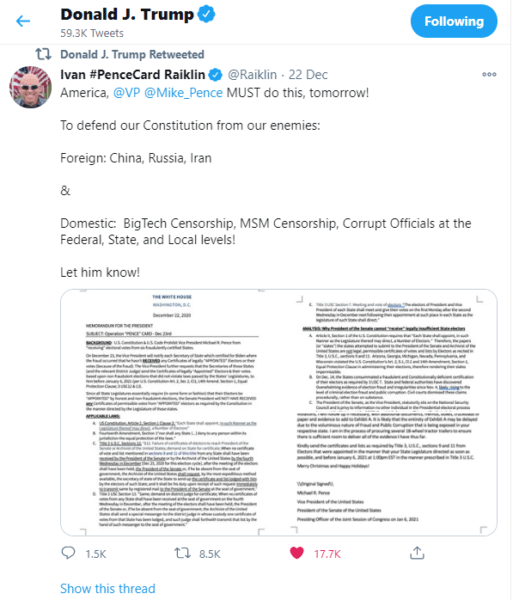 The #PenceCard memo details that the Vice President, in his role as President of the Senate, has the sole power to check and reject unconstitutional Electors to the Electoral College.

The drafters of this White House memo believe that the federal check to the states’ elections resides with Vice President Mike Pence in his role as President of the Senate. Additionally, Pence has the sole power determine whether to reject impermissible states of electors. However, Pence is legally required to do this on the fourth Wednesday in December, which this year falls on December 23…

If Vice President Pence then choose to follow the law, and does deny the Electoral College votes from the swing states of Pennsylvania, Arizona, Georgia, Nevada, Michigan, and Wisconsin before midnight tonight, then all of the states in question will have until January 6th to either assign their Electoral College slates in their respective legislatures, or hold a new election.

Following the publication of the memo by National File, #PenceCard trended number 1 on Twitter, with supporters of the President encouraging the news to be spread as far and wide as possible.

YOU did this PATRIOTS!!

At the time of writing, the Vice President only has a few hours left to pull the trigger if he wishes to go through with the plan.