Sources in the Trump administration confirmed to National File that President Donald Trump’s most vocal advocates within the White House have determined that both U.S. Code and the Constitution contain language that requires Vice President Mike Pence to reject unlawful Electoral College certificates, but Pence must act by no later than Wednesday, December 23.

The drafters of this White House memo believe that the federal check to the states’ elections resides with Vice President Mike Pence in his role as President of the Senate. Additionally, Pence has the sole power determine whether to reject impermissible states of electors. However, Pence is legally required to do this on the fourth Wednesday in December, which this year falls on December 23.

National File’s sources in the White House indicated that the memo was requested by those in the President’s circle who are most keen to see the 2020 election, and the ensuing fallout, administered in as transparent of a manner as possible. They also indicate that the push to find a path to verify the 2020 election’s integrity is not coming solely from the White House, but also comes from across numerous agencies in the administration.

The emergence of the memo could mark a decided shift in roles for Pence, our sources explain. Since the days immediately following the election, Pence has remained relatively silent compared to President Trump and his legal team.

This memo will likely interfere with Pence’s travel plans, as the vice president recently announced his intention to travel to Israel for two weeks after January 6, when he will preside over a joint session of Congress, according to the Times of Israel.

What’s Inside The Memo

Article II, Section 1 of the U.S. Constitution requires that “Each State shall appoint, in such Manner as the Legislature thereof may direct, a Number of Electors.”  Therefore, the papers (or “slates”) the states attempted to submit to the President of the Senate and Archivist of the United States are not legal, permissible certificates of votes and lists by Electors as recited in Title 3, U.S.C., sections 9 and 11.  Arizona, Georgia, Michigan, Nevada, Pennsylvania, and Wisconsin violated the U.S. Constitution’s Art. 2, S.1, Cl.2 and 14th Amendment, Section 1, Equal Protection Clause in administering their elections, therefore rendering their slates impermissible.

On Dec. 14, the States consummated a fraudulent and Constitutionally deficient certification of their electors as required by 3 USC 7.  State and federal authorities have discovered Overwhelming evidence of election fraud and irregularities since Nov. 4, likely  rising to the level of criminal election fraud and public corruption. Civil courts dismissed these claims procedurally, rather than on substance.

Pence must then notify the Secretary of State in each contested state that they have until January 6 to send a legal Electoral College certificate.

The President of the Senate, as the Vice President, statutorily sits on the National Security Council and is privy to information no other individual in the Presidential electoral process has — not the States, not the SCOTUS, not U.S. Congress. This specifically includes any classified evidence and assessments which emanate from EO 13848 regarding foreign interference with US elections. Therefore, the President of the Senate is uniquely qualified to issue judgement on impermissible electors.

This is not an option for Pence. If he intends to follow the law from December 23 until January 6, he must instruct these states to remedy their Electoral College certificates.

JUDGMENT:  All of these factors above inform and contribute to the Vice President’s analysis in deciding that he, as the representative of the Federal Seat of Government did not “receive” a constitutionally permissible slate of electors.  For that reason, he is not only duty-bound to request that the States send certificates and lists as required by Title 3, U.S.C., sections 9 and 11 from Electors that were appointed in the manner that the State Legislatures directed as soon as possible, he is also the sole plenary power that has the authority to make this determination.

The drafters of the memo also tell National File that, assuming the six contested states – Pennsylvania, Arizona, Georgia, Michigan, Wisconsin, and Nevada – do not remedy their Electoral College certificates by either selecting them in the Legislature or holding another election, President Trump will prevail in the Electoral College.

As there will no longer be 538 possible electoral votes, with several states having having disqualified themselves by refusing to comply, President Trump will have accrued 232 electors to Joe Biden’s 227.


Sample Letter For Secretaries of State

The memo also contains a sample letter our sources say could be signed by Pence at any time on December 23. 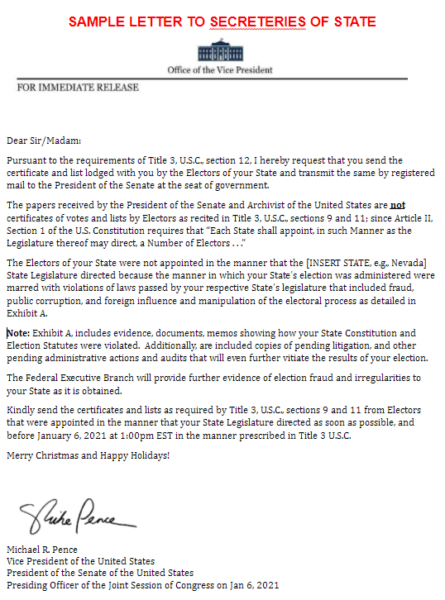 National File first covered Pence’s responsibility to act lawfully on December 23 last weekend. Thus far, National File has not been able to locate a relevant public comment from Pence or his surrogates.