45th President Donald Trump released a statement congratulating the country of Nigeria after the country banned use of Twitter in the country following the censorship of one of President Muhammadu Buhari’s tweets.

“Congratulations to the country of Nigeria, who just banned Twitter because they banned their President,” wrote President Trump in a statement released Tuesday afternoon. “More COUNTRIES should ban Twitter and Facebook for not allowing free and open speech—all voices should be heard. In the meantime, competitors will emerge and take hold. Who are they to dictate good and evil if they themselves are evil? Perhaps I should have done it while I was President. But Zuckerberg kept calling me and coming to the White House for dinner telling me how great I was. 2024?”

As National File reported earlier this month, the government of Nigeria permanently banned Twitter from the country following censorship of the Nigerian President:

In an act of censorship, Twitter deleted a tweet where Buhari called for strong action against a militant separatist organization advocating for an independent state in the region of Biafra. “Many of those misbehaving today are too young to be aware of the destruction and loss of lives that occurred during the Biafra war,” Buhari wrote on Twitter. “Those of us in the fields for 30 months, who went through the war, will treat them in the language they understand.”

The tweet followed a wave of attacks on police stations by the Eastern Security Network (ESN), a radical Biafran terrorist group. The ESN had been responsible for dozens of deaths of police officers and government officials. Following Twitter’s censorship of Buhari, the Nigerian government struck back by banned the globalist social media platform from their country altogether.

In a press release issued on Twitter, Information Minister Lai Mohammed said that he had chosen to take action against Twitter because of “the persistent use of the platform for activities that are capable of undermining Nigeria’s corporate existence”, such as promoting violent separatists.

President Trump remains banned on Twitter following tweets he sent regarding the mostly peaceful protests that occurred at the U.S. Capitol on January 6, and Facebook recently revealed that President Trump will be suspended from the big tech platform until January of 2023, effectively banning him from the platform for two years, until after the 2022 midterm elections have concluded. President Trump then warned Facebook CEO Zuckerberg that it will be “all business” when he returns to the White House. 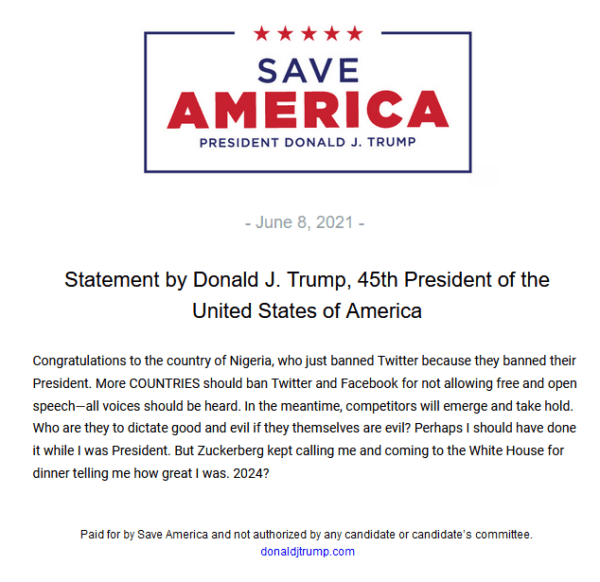