Following several controversial, high-profile legal actions against the National Rifle association, InfoWars, and We Build The Wall, Andrew E. Krause is resigning from her position as Assistant U.S. Attorney for the Southern District of New York (SDNY) two weeks after a speech AG Bill Barr delivered at Hillsdale College, in which he made very pointed comments criticizing political prosecutions in his Department of Justice.

The SDNY has made headlines for several high-profile cases involving conservative leaning organizations, such as the NRA. New York Attorney General Letitia James has previously called for the dissolution of the NRA.

Cases involving InfoWars and We Build the Wall have also thrust the SDNY into the media limelight in recent months.

In June, President Trump fired SDNY Attorney U.S. Geoffrey Berman, after the latter refused to resign from his post following an announcement from Attorney General Bill that Berman would be “stepping down.” Berman was then replaced by Acting U.S. Attorney Audrey Strauss. Krause held his position since October of 2012, and studied ethics at Yale.

On Thursday, National File received the news that Krause had submitted a letter of resignation from his position as SDNY Assistant U.S. Attorney, filed on September 30. 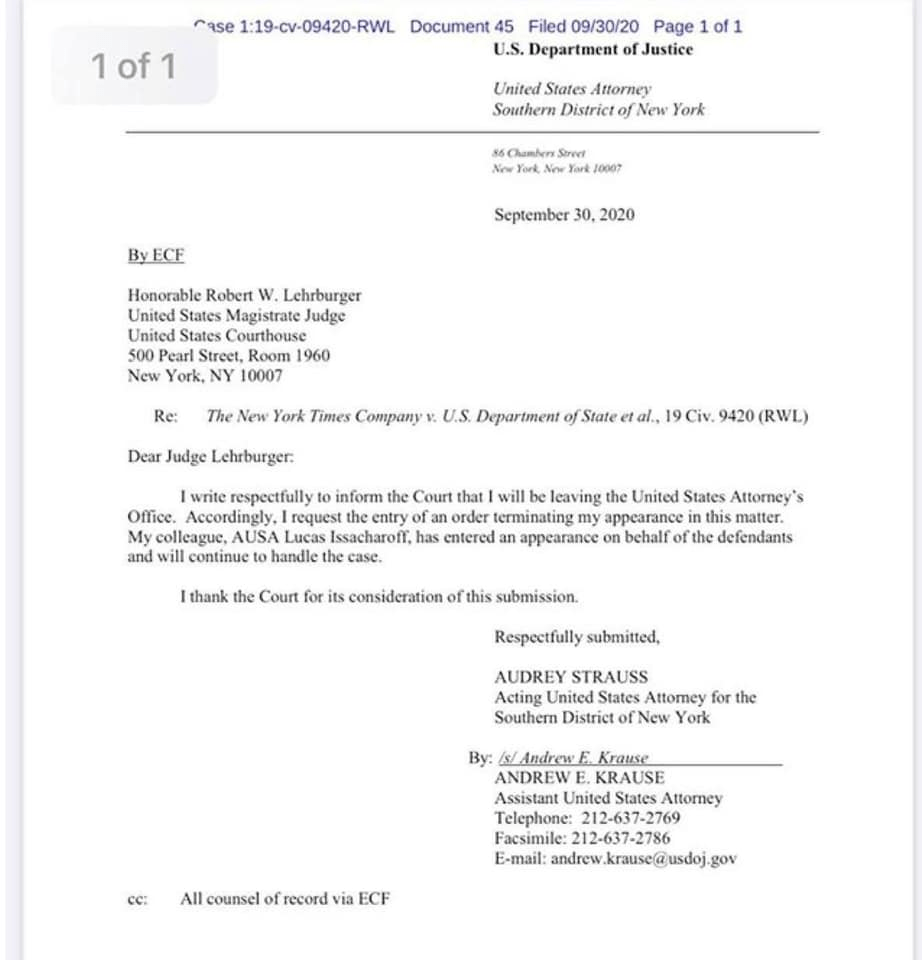 Krause’s exit comes just two weeks after a speech by AG Barr at Hillsdale College, in which Barr delivered a scathing rebuke of politically motivated targeting within the Justice Department.

“I’d like to be able to say that we don’t see headhunting in the Department of Justice,” Barr said. “That would not be truthful. I see it every day.”

Barr also referenced the “criminalization of politics,” which he said has shifted the political atmosphere to the point where “now you have to call your adversary a criminal, and instead of beating them politically, you try to put them in jail.”

“If you’re not in power, you’re in jail… or you’re a member of the press,” Barr quipped. The AG also noted that “Letting the most junior members set the agenda might be a good philosophy for a Montessori preschool, but it is no way to run a federal agency.”

National File mistakenly referred SDNY Acting Attorney Audrey Strauss as having resigned from her role at the Justice Department. In reality, it was Assistant Attorney Andrew Krause. National File apologizes to Ms. Strauss.