The Texas Republican Party voted to censor its own Gab account after Abbott claimed it is an "anti-Semitic" platform with no evidence.

Despite Texas Republican Party Chairman Allen West previously pledging not to delete the party’s Gab account, the State Republican Executive Committee today voted to circumvent West’s decision and delete the account. This follows the baseless lie from Texas Governor Greg Abbott that Gab is “anti-Semitic” and, thus, has no place in Texas.

During a party meeting today, the SREC “has voted to delete the @TexasGOP Gab account on a 35-25 vote.” Ironically, the news was broken by the Texas Republican Initiative, which claims its goal is to grow the “Republican Party by supporting and communicating the successes of Republican leadership for all Texans.”

The SREC has voted to delete the @TexasGOP Gab account on a 35-25 vote. #txlege

This comes after Abbott declared, without evidence, that Gab is an “anti-Semitic” platform that has no place in Texas. National File reported:

In the video, Abbott is seen sitting in his wheelchair while flanked by the American and Texan flags, with the Israeli flag taking a prominent role centered directly behind him.

“Anti-semitic platforms like Gab have no place in Texas, and certainly do not represent Texas values,” Abbott said. The governor then displayed an unnamed piece of legislation created by Republican Texas representatives Phil King and Craig Goldman, which he proudly proclaims to fight “anti-semitism in Texas.”

The last message posted to the party’s Gab account claimed that it would not delete the account and “will always fight censorship.” This appears to have been a lie.

“We support the First Amendment, including free speech platforms,” the account wrote on March 11. “The TexasGOP has no plan to deplatform from any of our social media accounts. The First Amendment still shines brightly in the Lone Star State.” 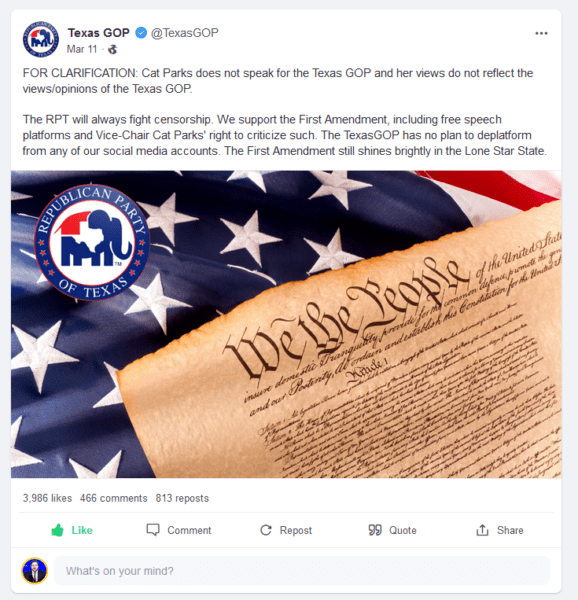 In a statement, Gab CEO Andrew Torba told National File, “The Texas GOP has been successfully subverted by woke liberal women like Cat Parks who falsely claim to be conservative. It’s astonishingly pathetic and the GOP across this country will continue to lose unless and until real leaders with a backbone step up to reclaim the mantle of leadership.”

“The GOP needs to remove subversive liberals from its ranks immediately or risk never winning an election ever again. Voters in Texas will not forget this.”

At the time of publication, the Texas GOP Gab account has not been deleted. It was created in late January of this year, and has amassed over 21,400 followers.

This is a breaking news story and may be updated with additional information as it becomes available.