NBC News has identified the suspect in the fatal car knife and knife attack at the Capitol in Washington, D.C. on Friday as Noah Green, a 25-year-old member of the Nation of Islam. Green is a black male who has reportedly made inflammatory posts about politics and religion on Facebook.

Speaking on MSNBC, NBC’s Pete Williams stated that Green “may have lived in Virginia’ and, “On his Facebook page, he notes that he is a follower of the Nation of Islam.”

NBC's Pete Williams reports on @MSNBC: The suspect in Capitol Police incident is a 25 year old Indiana man named Noah Green. May have lived in Virginia. On his Facebook page, he notes that he is a follower of the Nation of Islam. Suspect is now dead.

One post on the Facebook profile reportedly contains an excerpt from nation of Islam founder Elijah Muhammad titled “Lull before the Storm”:

An Intro to the Honorable Elijah Muhammad and his divine warning to us all during these last days of our world as we know it.
Satan’s rule over us is up.
“ALLAH SAID, ‘I have prepared for My righteous slaves as no eye has ever seen, nor an ear has ever heard nor a human heart can ever think of.’”
Again in the Holy Bible he says, “‘What no eye has seen, what no ear has heard, and what no human mind has conceived’ — the things God has prepared for those who love him” 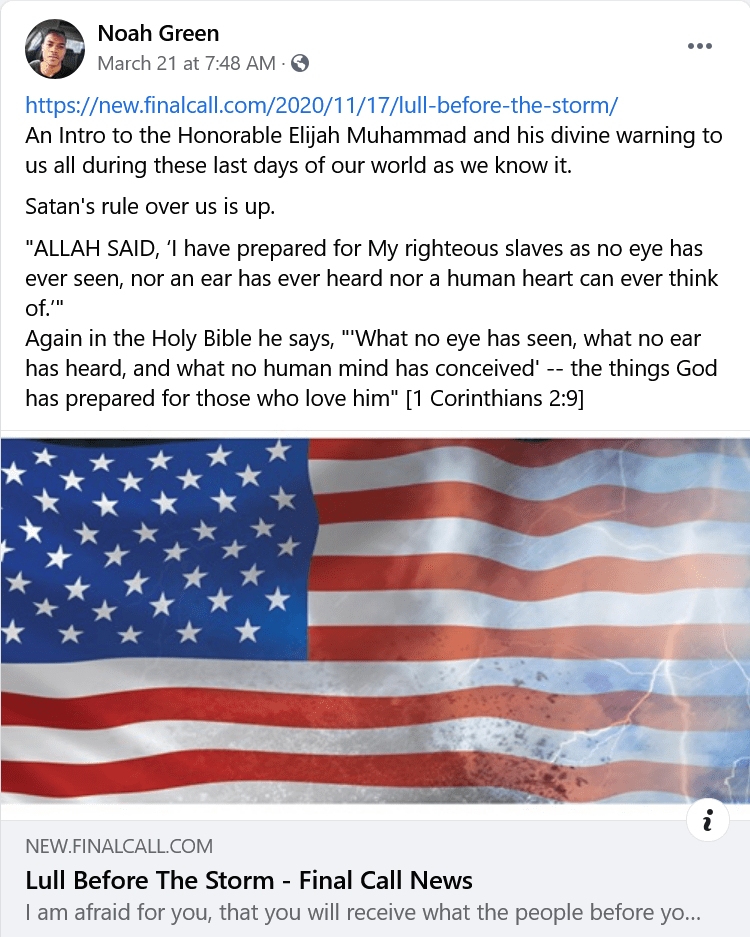 Another post from Green talks about the “end times” and “facing death”:

In addition to my last post… I encourage everyone to study Revelations, study the signs of end times, study who the beast is, study who the anti-Christ is, study who the false prophet is, and study the created images during those times.
The Minister is here to save me and the rest of humanity, even if it means facing death. Be willing to deny yourself and follow him, pick up your cross. The Honorable Elijah Muhammad (his teacher, the exalted Christ) is alive and in power (I bear witness). Study the Minister, watch his lectures, study Elijah Muhammad, study the mother wheel (which is present here in America [I bear witness again]). We have a little time.
Peace.
Noah X

Update: Facebook was swift to remove Green’s profile within minutes of him being identified as the suspect, but users were able to capture screenshots of the page before it disappeared.

Here are some screenshots I took of his posts right before the profile was removed pic.twitter.com/B1uVExwm5I

National File first reported on the Capitol attack earlier this Friday. This is a developing story and may be updated as more information becomes available.