Biden is set to launch airstrikes on equipment left in Afghanistan as thousands of Americans remain stranded in Taliban territory.

As thousands of American citizens remain stranded in Taliban-controlled Afghanistan, Joe Biden is considering a series of airstrikes on equipment left behind by the US, according to a report by Axios.

According to Axios, U.S.-made Humvees, planes, helicopters, night-vision goggles and drones –  around 2,000 armored vehicles and nearly 40 aircraft – have been left behind and retrieved by the Taliban after the United States military suddenly withdrew from Afghanistan at the direction of the Biden regime. “Everything that hasn’t been destroyed is the Taliban’s now,” one U.S. official told Reuters. National File previously reported that the Pentagon wouldn’t comment on whether they even tried to destroy the abandoned military equipment. (READ MORE: Gosar Asks Biden Administration: ‘What Is The Plan To Get Our Equipment Back?’)

Now, the Biden regime is considering launching airstrikes “against the larger equipment” as thousands of American citizens remain stranded in the Taliban nation. The report notes that the Biden regime is fearful that the move could provoke the Taliban and interfere with evacuation efforts. Meanwhile, Biden is preparing to go home to Delaware for a “long weekend” and Kamala Harris is racing to the airport for a 6-day “trip” to Southeast Asia.

President Donald Trump, who has been very critical of Biden’s Afghanistan disaster, said in a previous statement that “first you bring out all of the American citizens. Then you bring out ALL equipment. Then you bomb the bases into smithereens – AND THEN YOU BRING OUT THE MILITARY. You don’t do it in reverse order like Biden and our woke Generals did. No chaos, no death – they wouldn’t even know we left!” Biden has been widely criticized for abandoning President Trump’s withdrawal strategy, which would have had Americans out of Afghanistan in May of this year. 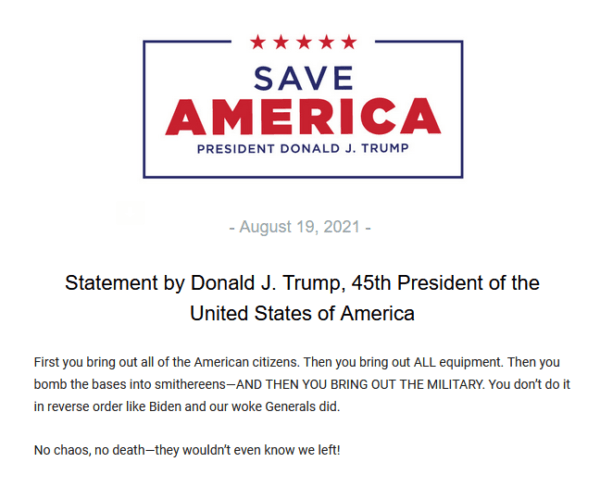