The FBI admits there was no organization behind the January 6 protests, but some warn this is to protect their own involvement

According to an exclusive report published by Yahoo News, the FBI is admitting there is “scant” evidence that the mostly peaceful protests at the U.S. Capitol were planned by any organization, or on any platform.

Yahoo reports that, according to “current and former law enforcement officials” the “FBI at this point believes the violence was not centrally coordinated by far-right groups or prominent supporters” of 45th President Donald Trump. “Ninety to ninety-five percent of these are one-off cases,” one law enforcement official reportedly said, “But there was no grand scheme with Roger Stone and Alex Jones and all of these people to storm the Capitol and take hostages.”

This seems to throw cold water on the idea that protesters used Gab, Parler, or Facebook to coordinate violence on January 6. Andrew Torba, the CEO and founder of Gab, is now demanding a retraction from the New York Times for its article accusing the platform of being used to organize the protests.

In an email sent to the New York Times that Torba posted to his Gab account, Gab Legal wrote that Gab “hereby demands a retraction of the false and defamatory reporting published by the New York Times Sheera Frenkel on January 6th, 2021 claiming without providing any evidence whatosever that the storming of the Capitol was organized on our platform.”

The email then highlighted the reporting confirming that the FBI does not believe the protests were organized, and suggested legal action may be forthcoming. “This statement of fact was not only false, it was recklessly and maliciously false. FBI officials’ own statements on the matter, reported today, prove it was false.” Torba also posted a lengthy article to his blog, noting that the FBI’s admission demolishes the narratives constructed by the New York Times and the ADL. 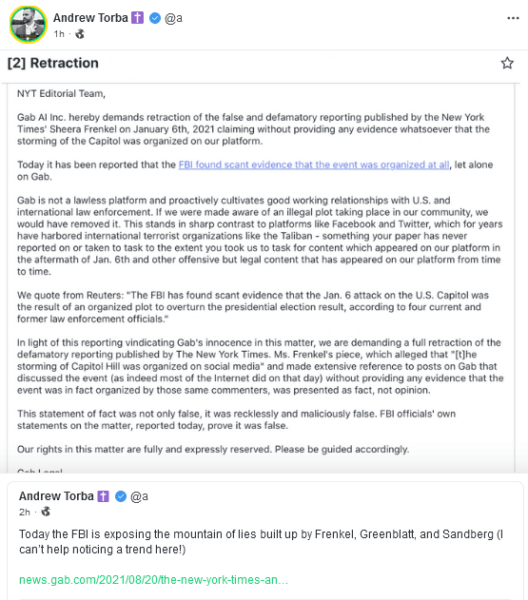 However, Darren Beattie of Revolver News warned that the admission from the FBI may simply be to provide cover for the federal involvement in militias that appeared to have coordinated at least some of the events of January 6.

“Before taking a victory lap here, understand what the feds are doing with this admission,” wrote Beattie. “This Fed announcement is 100% about the FBI getting an excuse to justify kneecapping their ‘investigations’ into militia leadership.”

Before taking a victory lap here, understand what the feds are doing with this admission…

This Fed announcement is 100% about the FBI getting an excuse to justify kneecapping their "investigations" into militia leadershiphttps://t.co/oaP4xnjd0r

For months, Revolver News has profiled Stewart Rhodes, the conspicuous leader of the Oath Keepers militia which attended the rally. As reported by Beattie, several of Rhodes’ associates and fellow Oath Keepers have been indicted by federal prosecutors for their actions on January 6, with the prosecutors sometimes citing conversations the defendants appeared to have with Rhodes. Yet, Rhodes remains free, leading many to believe he may have been working for or alongside federal agents on January 6.

National File has since confirmed that federal law enforcement was embedded in the crowd alongside militia members, and the connections made by federal law enforcement on January 6 eventually led to arrests. Additionally, National File has profiled a suspicious man who pretended to be a member of the Proud Boys, and despite his criminal history and video that appears to show him behaving violently toward police and Trump supporters on January 6, he has thus far not been a subject of federal investigation as far as National File knows.

Rep. Paul Gosar recently spoke to National File and suggested that the alleged kidnapping plot against Michigan Gov. Gretchen Whitmer is “proof in the pudding” that the FBI or other federal law enforcement was directly involved in the January 6 protests.