A Delaware County, Pennsylvania school district is filling its classrooms and libraries with books promoting transgenderism in children and describing acts of rape and pedophilia in graphic detail. The Haverford School District has been discarding parental pushback and continues to characterize its far-left social agenda as a “guidance” program designed to help students with mental health. The sexually explicit books are part of Haverford’s “social emotional learning” curriculum, which has been banned in other states, such as Idaho, for containing leftist social ideology.

The library at the Haverford School District’s Middle School contains multiple books available to students that have drawn the fury of parents. Despite the pushback, the far-left Haverford School Board has refused to remove the books from their library and classroom curriculum. Instead, the district is making the books available for students. Furthermore, Haverford’s “mental health professionals” are recommending the books for vulnerable children deemed to be struggling mentally and emotionally.

One of the books, known colloquially as “Beyond Magenta” but fully titled Beyond Magenta: Transgender Teens Speak Out, glorifies so-called sex changes or gender transitions among children and includes graphic first-hand accounts of childhood sex and molestation. One of the books subjects, a male named Frank who proclaimed womanhood, vividly describes life as a “sexually mature” child who “hated being a kid” and “loved oral [sex].”

“I was sexually mature,” Frank’s passage reads, later going on to say that “I used to kiss other guys in my neighborhood, make out with them, and perform oral sex on them. I liked it. I used to love oral. And I touched their you-know-whats. We were really young, but that’s just what we did.”

At another point in Frank’s passage, he says that people around his neighborhood would say he’s “not gay” because he was “making out with a girl” too. He even goes on to describe the “pedophiles” who would “hit on” him, prompting him to try to escape to a more crowded area.

“Guys used to hit on me – perverts – pedophiles. I’d see guys giving me a look, and it kinda creeped me out. They would touch themselves saying, ‘Come here, sweetie.’ Something told me not to go. I ran away. I ran to where there was a lot of people.” 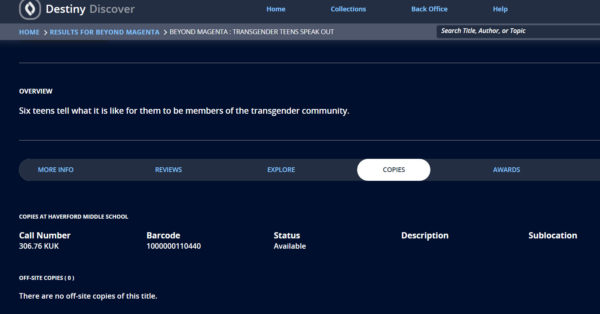 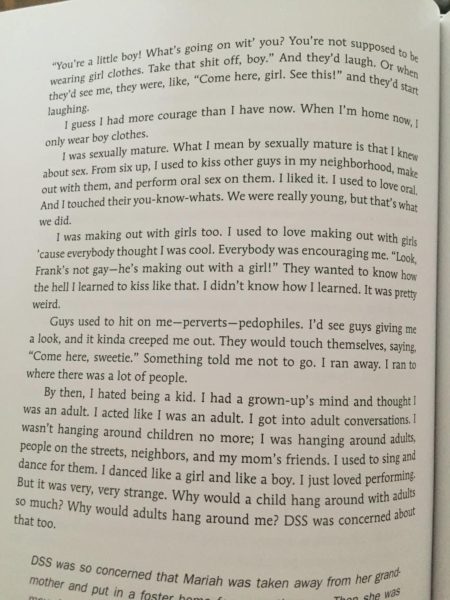 Out of Darkness, another highly sexualized book, is stocked in the Haverford High School library. Promoted by Black Lives Matter leftists, Out of Darkness has already been removed from libraries amidst parental outrage by schools all across the US. The subject of the book focuses on an interracial sexual love affair between Texas middle school students in the 1930s and graphically describes a sexual encounter between the children.

“He shifted in his pajamas, and the part of him that made him a man stuck out, reddish purple and frightening,” reads Out of Darkness in the Haverford High School library. “She had never seen one before except on a baby. This was different,” the passage goes on.

“He lifted her hand to his mouth and licked it. Then he lowered her hand down and closed it around the hardness. His hand moved hers. His left hand gripped her shoulder, pressing her head tight against the hard, flat plane of his stomach. She watched her hand move back and forth like it didn’t belong to her. In the distance, she heard the train pass. A moment later the thing leaped. Henry’s whole body shuddered, and a hot mess lay across her palm and between her fingers. Henry wiped himself quickly with a handkerchief. Then, never letting go of her shoulder, he urged her toward the door. “Come on,” he said once it was open. He walked her to the bathroom and then guided her hand to the sink.” 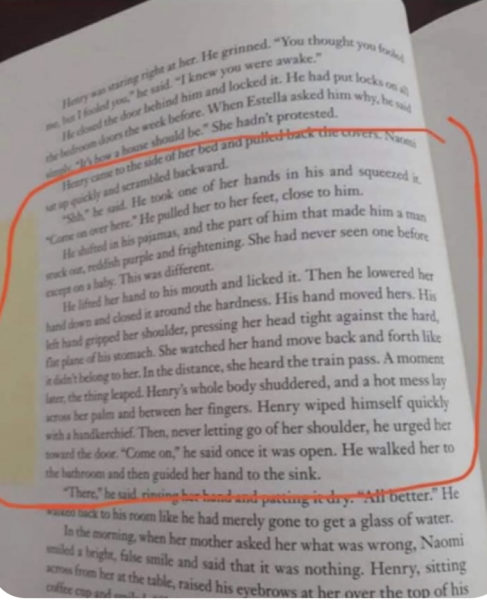 Though the mother of a Haverford High School student read the previous passage aloud during a school board meeting, district officials have largely shrugged off the parental outrage, echoing left-wing school boards across the country who, like the board in Haverford, have become dismissive, or even openly hostile, to the will of parents.

The aforementioned books are just two examples of numerous Haverford School District books that contain similar themes. Furthermore, as National File previously reported, the district’s K-3 curriculum includes numerous books that focus on gender ideology and progressive views on race. Second graders in the district are required to read Jacob’s New Dress, which follows the story of a boy who wishes to dress like a girl.

Last year, as Haverford parents organized to oppose leftist Critical Race Theory-themed curriculum in schools, one school board member made unfounded accusations that a parent had threatened her with a gun. The same board member previously claimed to have “found” a racist pro-Trump note in 2016, the validity of which has never been verified.

School districts around the country have become embroiled in battles between parents and school board members who have decided that they know what’s best for other people’s children. In Loudoun County, Virginia, parental opposition to the local school board’s radical Critical Race Theory and pro-trans agenda helped propel newly minted Governor Glenn Youngkin to victory in 2021. As the left has been scrambling to combat parents, the Biden Administration has even directed the Department of Justice to investigate those interested in playing a role in their children’s school life.